The First Trail of the Season

The day was graced with above zero temperatures. The temps soared up into the twenties today, and it sure felt like a heat wave. So the D and I took off from the city, headed north to a state park situated along a scenic river. Although we arrived later than in the afternoon then we had planned, it seemed our timing was lucky as they had just finished grooming the cross country trails. 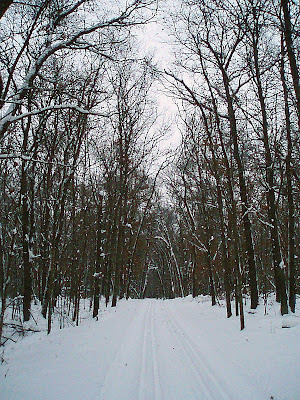 This year, they had two tracks groomed side-by-side. Skiing through the old oak trees is especially nice because many of them retain their leaves through the winter. They make a wonderful rustling sound as the wind picks up. This part of the trail is about a mile long, then there is a cut down to the river, stretching for another mile right alongside the river and ending with a steep climb back up the riverside cliffs.

Although we were a mere hour north of the city, it felt like we were the only ones in the woods. There were no sounds but the swish of our skis and the sound of the trees. As we got closer to the river, there was the occasional sound of the rush of water through the open areas of the frozen river. We saw no wildlife or birds today. Last year we saw some eagles, and unexpectedly, a flock of swans. So many shades of white in this winter landscape. Solitude and tranquility in every direction you look.

I encourage readers who live in areas where there is snow to go out and cross country ski. Skis and boots can be obtained gently used, and fees are relatively low (especially in comparison to downhill skiing). It is a great opportunity to explore state parks in the winter months, and a great way to get outdoors in a time when it is too easy to stay snuggled up indoors. The moderate exertion of cross country skiing keeps me warm, and of course, I dress in layers to I can take off as I get hot and sweaty, and bundle up when the wind starts to blow along the river. We are lucky in that our city grooms ski trails through city parks and public golf courses. This is primarily how I get my cardio exercise in the winter. 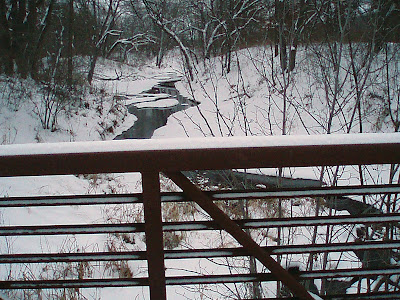 D and I have spent time in this park in every season this state has to offer. It is interesting going by those landmarks on the trails now covered in snow and ice, when previously there was an abundance of green leafy trees and loads of wildflowers. Like I said, we got to the ski trail later than we had planned, and I was hoping we could make it back to the Jeep before the sun set for the day. We had a steep climb up a slope and I didn't want to be caught there as the temperatures dropped. D is able to climb the slope on his skis. I don't know how he does it. I just keep sliding backwards, so I try for a while, but then eventually I kick off my skis and walk up the slope.

On the way up the air seemed less gray, then suddenly it seemed like all the tree trunks and the blanket of snow was glowing pink. As we started on the last bit of the ski trail, the setting sun broke through the clouds,and it blazed a bright fiery orange. We greeted the return of the sun and the beginning of a new year. 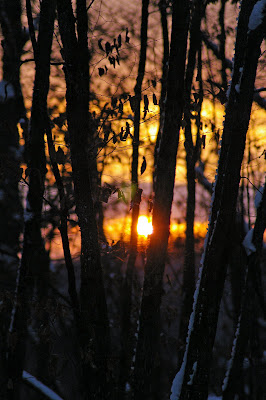