Stepping off the trail

It was a foggy day in the park today. I have no idea how long the trail is. We wind around in each area of the park, on and off the paved path, sometimes right on the ponds, sometimes along the edges depending on the season. We are usually there for an hour with occasional stops at the benches along the way.

The park has so many different personalities. We see a different trail each day. Today there was a thick blanket of fog, diffusing the shapes and colors of the distant trees. 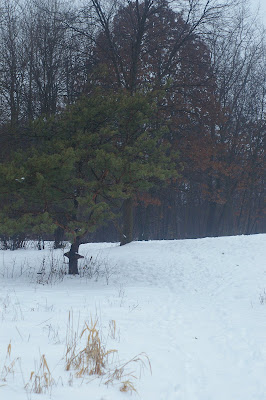 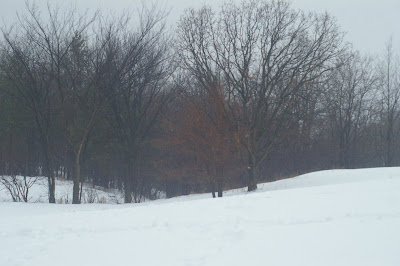 The air temperature was very warm, soaring into the middle thirties. Believe me, the mid-thirties feel like a heat wave after two weeks of sub zero arctic freeze. I was reminded of the water below as we crossed the softening ice over the pond. 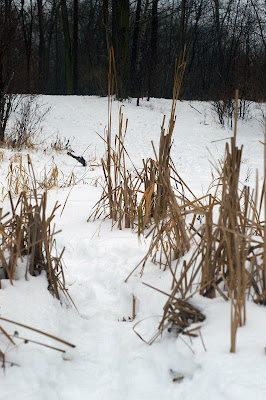 The paths were much easier to walk through on the flat ground. But as we moved into the hills, the trekking through deep snow uphill was more of a challenge. 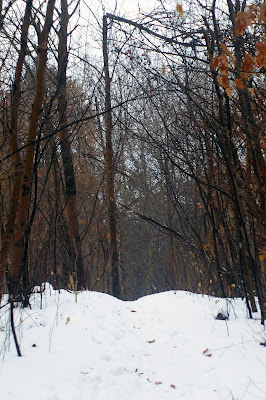 The treasure spots today were off the path, risking the sink into 5 feet of snow. But the threat of wet feet was worth it to get up close to these winter mushrooms. The shelf like shapes remind me of lit votives offered in prayer. 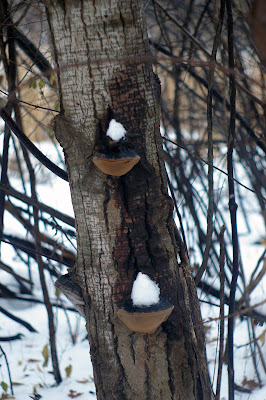 Stepping off the trail reveals things pretty to look at, but these things are often not suitable for foraging. Why is it that whenever I spot something in nature, be it a berry or a mushroom, my thoughts first go to whether or not I can eat it? I have gathered raspberries, blackberries, grapes, and ramps growing in the wild, but collecting mushrooms is an entirely more complicated process. 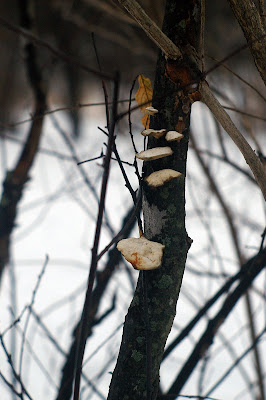 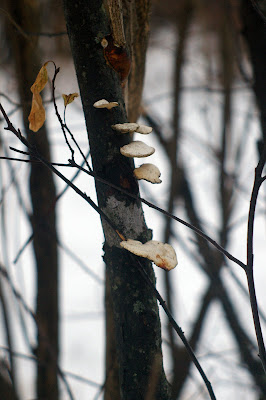 Who would have thought I would find such a vibrant red in late December? Not me. Just these four little leaves, and another three on a nearby branch are all that remain of autumn colors. 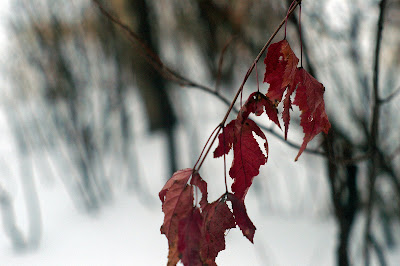 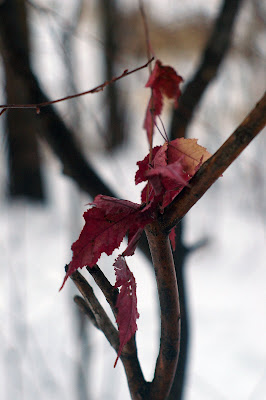 And then, of course, there was the raindrops on the pine needles. 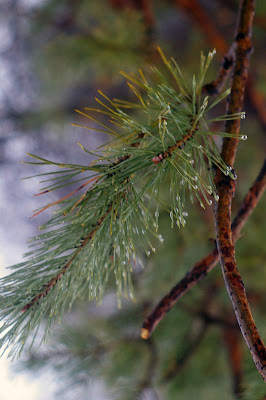 I hadn't realized what a blessing it is to have this warm air in the middle of December. Usually the cold takes hold of the area, making all movement outside a bit crunchy, a constant crush of snow and ice. The body gets weary as the winter seems to drag on month after month, even in this decade which has been considerably less cold and less snowy than most. This warm burst of air that pushed up from the south was truly a respite from the long drag. The rain and fog lifted my spirits so much so that I don't feel the bone-chilling weight of winter. I look forward to more of what this winter has to offer. More snow, more cross country skiing, more lit fireplaces on a saturday night. And, technically winter has just begun. Embrace the season. OK, I'm trying, and so far, it's fun.