This month had the year's largest full moon. It's something like 15 percent larger than the other full moons. In it's orbit around the earth, this is the time of year where it is closest to us. It lights up the neighborhood like a celestial floodlight. I suppose that's exactly what it is, reflecting the sun light and pointing it down to the earth like a spotlight. 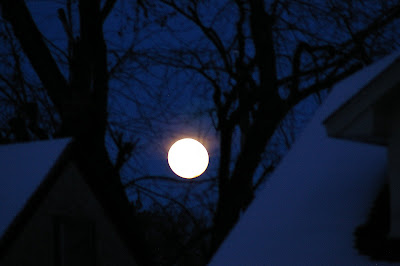 The full moon was on the night of January 11, the eve of Big D's natality. I absolutely love that I'm married to a forty-year-old! 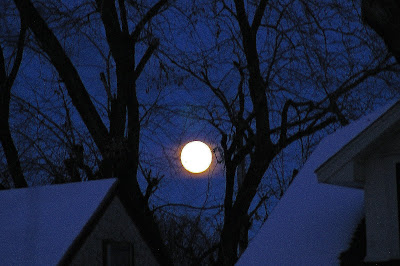 As the night darkened, the moon took on an eerie brightness. There were candlelit cross country ski trails at the state park on the St. Croix river. But the temperatures dropped to single digits and that's just too cold. 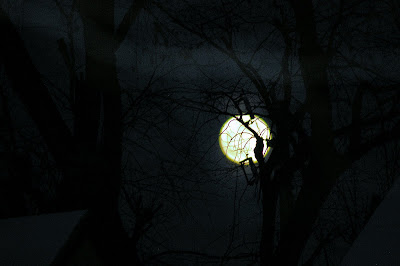 The temperatures steadily dropped, and my body took on a shiver that prevented me from capturing the details of the moon. I learned that even with a tripod, there is a definite shake to the images shot without a remote shutter. It's a pity because my zoom seemed to draw the moon closer than our cheapy telescope.

Another one of those things that I cannot easily transition from shooting film to shooting digital. Learning something new every day with this camera, and it makes the day more interesting.

Labels: 28 Days garden the path of the moon winter