Who knows? Not me. But, there it is and it is here.

The Universe told me today:

Next time you make a wish, Lotus, wish for what is, because really and truly, things don't get much better than this.

And, so, I choose to believe. This is where I am supposed to be, and so I will be.

The trail, I ask myself, where is the trail leading? Does the answer even matter, aside from the idea that it leads away and out?

Away from what? And out of where? My life is good, but I can't help dwelling on the idea that there's got to be more. More of what? Something. There's got be something more. And yet, don't I live in a culture where everyone is seeking more? Isn't this totally contradictory to the message from the Universe?

Gods! Who cares! Just be!

So, what's this about?

I meant to write about things in my life that seemed to be "alternative," my CSA, for example. But, just last night I threw away a ton of root vegetables that have been sitting in the bottom storage bin of my refrigerator. In previous years I had taken all those roots - turnips, beets, carrots, parsnips (ok, maybe not the parsnips cuz they smell nasty to me!), celeriac - and cooked them up into really delicious eggrolls. Frozen-ed them, like my mother is fond of saying, and ate them until spring came around with a new crop of local, organic produce. But, this year, or rather, last year in 2008, this project just didn't happen. It's a bitch to cook up the filling, assemble and fry 80-100 eggrolls by my own self. Jeez! I need some female friends that like doing crazy things like this. 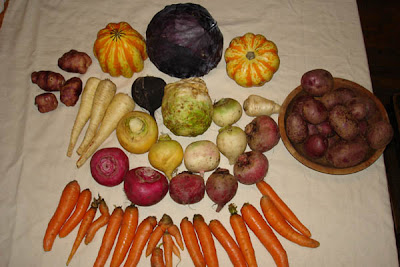 
So, a few words about CSAs. CSA stands for community-supported-agriculture, which is a fancy way of saying we've bought shares in a local farm and they deliver to us once a week whatever they happen to harvest that week. Look to the sidebar for a link to our CSA - Harmony Valley Farm. The first year we signed up, I ate vegetables that I'd never even heard of before. Everything turned out to be yummy, except the parsnips which smell na-aa-aa-sty! The great thing was that I didn't have to figure out what to cook for dinner, I just had to figure how to cook that things I got from the CSA. The first year was a dream with the delivery boxes topping 30 lbs. of produce goodness during the peak summer harvest.

This is our third year. The last two years were not as bountiful as the first. The farm, which is technically one state away from me, but close enough over the border to be considered local, was inundated with rain, rain, lots of rain, 17 inches of it in one night. Nearly the entire crop was lost, but those dang parsnips survived. The next spring, the same happened - so much rain that the fields were flooded again. It was early enough in the season to replant, so this year was good, although a little later than usual.

Now's the time to sign up for spring 2009. So, please consider looking into one in your region. It is a natural and economical way to eat healthier. The Big D and I suffer from withdrawal during the winter months - the vegetables are that good.
Labels: CSA Eating just Lotus What am I eating? And where in the world did it come from?