The beginning of the CSA season coincides with our return to the trailer. We have a really old trailer out on some land and when the weather warms, we try to head there every weekend. Cooking out at the trailer is a challenge so I usually end up choosing easy meats like sausages that can be cooked over an open fire. I'll bring along a few CSA items, but these are easy to prepare like salads. This weekend, our trailer's furnace finally gave out. Because the nighttime temps were going to dip down into the 30s, we returned to the city early. Initially I was excited to get back to my urban kitchen in order to get wild with the CSA.

But I was tired. Then spent most of Sunday working in my garden. When it came time to cook dinner, I was really tired. But I worked through my exhaustion, got the dishes done and had all the space I needed to prepare a meal. The menu:

I think this picture reveals what went wrong. 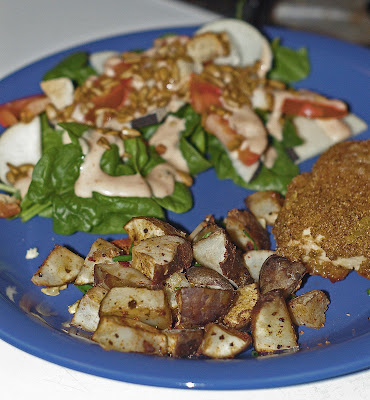 First off, there was too much dressing on the salads. I didn't have the energy to makes the ramp dressing, so we used conventional stuff. The black radish was crisp and crunchy. I think next time I will try grating the radish. And dang it, it was so cute, this little black thing, I should have taken a picture. I'm learning so much about CSA eating and also CSA blogging.

Second, I didn't roast the sunchokes long enough. I knew that sunchokes take a long time to cook up. They are really crispy and remind me of apples when I am chopping them up. I stuck a fork in them when I thought they were done, but that little test was not sufficient. I should have just tasted one before declaring that dinner was done. The good thing is that sunchokes can be eaten raw so eating slight crunchy ones is all right, if not tasty. I has tossed them with some olive oil and cajun seasonings, then topped then with chopped chives.

I have a few things left to cook up: rhubarb, burdock, spinach, ramps, parsnips.

As much as I looked forward to the season starting, the realities of this experiment hit me square on this weekend. Using high-quality ingredients makes it a lot easier to whip together a simple, yet amazing meal. I just have to make sure I cook it long enough!
Labels: CSA Eating What am I eating? And where in the world did it come from?