The first time I was introduced to rhubarb was through the Big D's uncle who has a farm in Iowa. Uncle D loved his rhubarb and had a constant supply of rhubarb sauce similar to an apple sauce. He was enthusiastic about sharing with me. I got a little nervous when all the other family members refused. They all watched as I had my first tastes and honestly, I wasn't impressed.

Then, I started the CSA and was receiving rhubarb every week in the beginning of the season. The first year I made an attempt at rhubarb bread. Yuk! It was not good, but this may have more to do with my baking abilities. The next year I cut up all the rhubarb and froze (or frozened it, as my mother is fond of saying), and when I thought I had accumulated enough, I made an apple/rhubarb crisp. Let's say it was an "OK," meaning it was edible, but not delicious. I can't tell you what happened last year because I don't remember, which means I probably composted it. And, that's not right!

CSA is all about embracing seasonal produce, I tell myself. I try to see the beauty in this stalks. 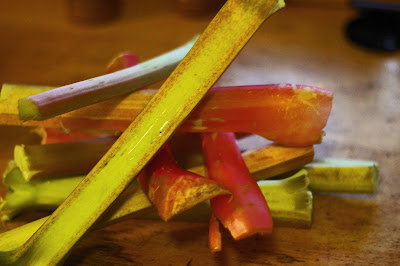 They are a pretty color, no? OK, so my head is in the right place and soon enough a recipe caught my attention: Jam! Got the recipe for strawberry rhubarb preserves at A Good Appetite.

I had to psyche myself for it so I put in some Bob Marley. Corny, yes, but just what I needed.

We're jammin' -
To think that jammin' was a thing of the past;
We're
jammin',
And I hope this jam is gonna last.

Hmm, cooking to Bob Marley adds a whole new layer of meaning to the lyrics. Noone I know makes jam as if jammin is really a thing of the past. And considering the hazards I encountered in the jam making process, I hope this jam is gonna last. I jammed in a tank top and an apron covering by body. When the jam boils up, it seems like a bubbling vat of molten lava. As the bubbles got bigger, the spray from the burst splattered out everywhere. Since I had to keep stirring, I ended with tiny little jam burns on my neck and arms - extreme cooking!

I gathered all the berries I had in the house: strawberries, blackberries and raspberries. I have made raspberry/wild blackberry jam before and knew from that experience that raspberries had natural pectin in it. So all these berries went into the batch along with the rhubarb and a little bit of lemon juice. 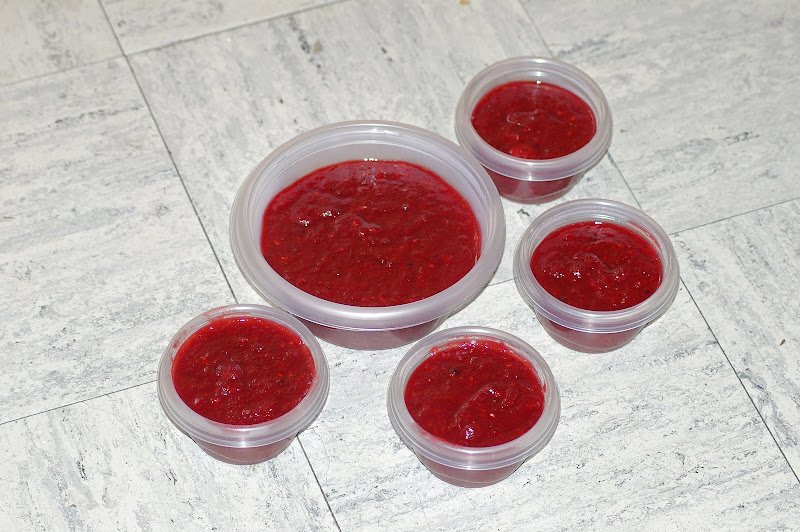 Don't be alarmed by the fact that the jam is on my kitchen floor! It was the best I could do on a cloudy day.

About the plastic containers: I decided to fill these so that I could share with family and neighbors. Next time I'm going to try a water bath. I have a canner but haven't taken the leap yet. This year is the year (I hope!). It seems like a project to try with a friend...
Labels: CSA Eating What am I eating? And where in the world did it come from?