The big change hit yesterday and it arrived with 45 mile/hour winds. The cool temps, the chilly raindrops and high winds hit just minutes after the Big D got off the ladder on which he had been scraping and painting the trim of our house. Whew. It was a wobbly ladder and if the winds had been high during the hours that he was working, there might have been serious injury.

I picked the few chili peppers we had growing in the garden. I picked them a little late because they are starting to dry up and wrinkle. But then, I am planning to dry and crush them into red pepper flakes, so I'm not to concerned about the state they are in. 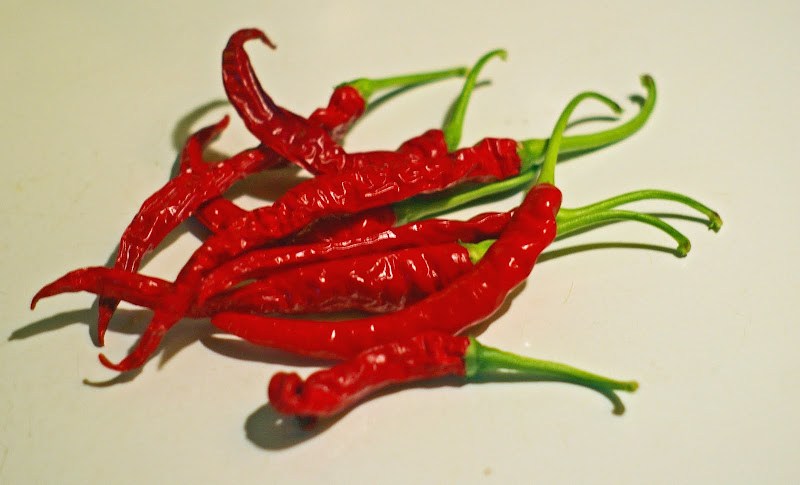 I spent some time fiddling with the self-timer on my camera. I want to have some maternity pictures and while looking on the internet for photographers in the area, I got it in my head that I should try a few myself. I'm only 16 weeks along, so I imagine getting better at this by the point that my belly is really bulging. I'm not all that pleased but was going to throw it up here on this site, but then, I realized that I captured a shot of the belly above my pregnancy belly and felt really fat. So, no picture yet, but am working on it. I don't know why I feel so distraught about this. It feels all of sudden, probably because I bought a scale and thought a little bit about the total number of pounds I'm supposed to put on by March. I gotta give up my lemonade which I am so bummed about. Everything else is in order in terms of whole grains, fruit snacks, etc. So, I figure it's the lemonade that's the culprit. More water, less sugar drinks.