...do not go well during the Mercury retrograde cycle! Oh, what a crazy set of weeks! I'm so glad to be on this side of the craziness. We repainted our kitchen and contracted to have our floors refinished, but were delayed and waylaid by a trip to the ER and a fatal system failure on my laptop.

The kitchen project started on Labor Day weekend. I quickly realized that I had clung too strongly to plans I had made years ago and no longer felt the same about those plans. There were several trips to the hardware store and change in paint color, but thankfully, that change was only quart-sized, so not too expensive. My plans were for a dusty blue on the lower third of the kitchen walls and a light yellow on the top part of the walls and the ceiling. 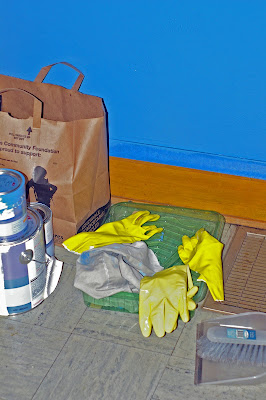 The yellow was much lighter than I wanted, so there were a few days of searching various stores for another color. 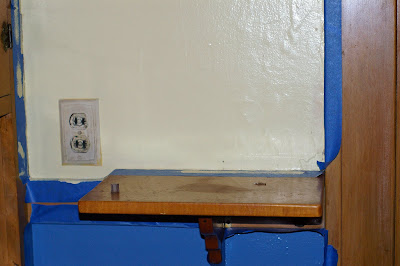 The hunt even took me to Home Depot, a store I haven't been to in years. But, I never did find the exact color I was wanting and in the meantime, the Big D found he could schedule the refinish of our floors much sooner than we had expected. So, I scrapped my plans to change the yellow and started the prep work for the floors.

Every thing had to be moved out of the living room and dining room. I have way too much crap in these two rooms. I am hoping that I will be able to throw out much of this and keep my house and life less cluttered.

We had assumed that it would be three weeks out to schedule the service, but it was only about four days out. We contracted with Dave's Floor Sanding and they were great! Which is the reason why I am linking to them here in case anyone in the area wants to hire them. At first I was thinking that they were available so quickly because of a drop in business due to the economy, but then I was told it was because we chose the week after school started which is typically their slow time. And as it turned out, the weather was perfect for drying.

We had to delay the beginning of the project because I got unexpectedly sick and had to go to the ER where they diagnosed a bad luck case of vertigo. Hopefully nothing chronic, but scary and debilitating. Dave's Floor Sanding was wonderfully accomodating and did not charge us for the two day delay.

They began the project by sanding the floors. We have no idea when the floors were last treated. We moved in to the house in 1997, so for us, it's been ten years of wishing and wanting newly cleaned floors. 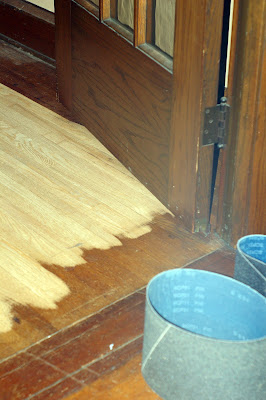 The house was built in 1924 and they used red oak for the floors. The previous stain was dark, almost dark enough to match the dark woodwork that is throughout the house. Also, our kitties have puked up so much over the years and left evidence all over the floors. Our floors seemed to be polka-dotted with puke stains. Which made it apparent that the protective coating had worn away. 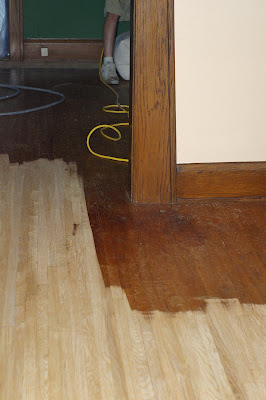 We decided on a natural finish rather than a stain in order to let the rich colors of the red oak to shine through. I knew that the floors would look nice when the work was finished. I had no idea how incredibly beautiful they would look! 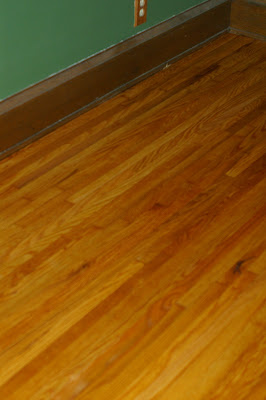 Things are going to change around here! No more walking on the floors with shoes on! No more clutter in the corners of the rooms. Baby will be able to crawl around without fear of splinters. I am considering painting these two rooms while everything is stacked in other rooms.

The morning that we had to leave the house, my laptop crashed! It was such a crazy week. Thankfully it was still under warranty and so, Dell sent out a technician to replace nearly every part in the laptop. I think I had a bad motherboard, but they weren't able to figure out the exact cause of the fatal system error. We stayed one night at my parents home, then moved to a close by hotel for the weekend. It was nice little vacation even though we were just a few miles away from our house.

Now, I'm tired. And will probably spend a few weeks recovering from all the turmoil. With my bad luck case of vertigo, I am forced to rest until that goes away. I'm taking a cue from the cats and finding places to lounge around before the next project. 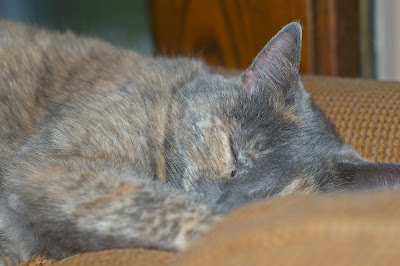 The next project? Oh, yes, there's another one around the corner. We are having our roof replaced which will be covered by our home owner's insurance. But I asked the Big D to wait to schedule this for after the mercury retrograde. And so, we will have a couple weeks of peace and quiet before the craziness starts again.