Love and the Slow Cooker

But, the slow cooker was different. I never knew, until recently, that slow cookers have a bad reputation amongst certain crowds. A bad reputation that comes with an association with canned goods and cheap cuts of meat, bland overcooked tastes and lazy cooking habits. I never knew because immediately after I got my slow cooker I purchased Not Your Mother's Slow Cooker Cookbook which includes a number of recipes that start with fresh ingredients. The title of the cookbook cracks me up because, like I said, my mother never had a slow cooker. She has one now. I think it's still in the box sitting on the shelf in her basement pantry area.

Well, here it is. My slow cooker. [Please ignore the shiny wall that makes my new paint job look like crap. Blame it on the flash and the Mercury Retrograde.] 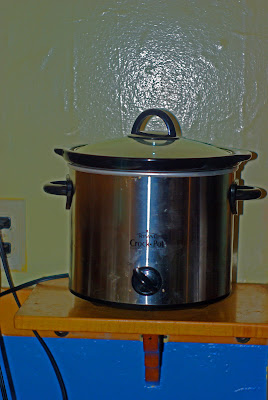 We met and fell in love somewhere back at the turn of the century. Things really got heated up when I was working full time. We rekindled the flame last summer when I realized that she came in handy for summer recipes. It took me a while but I caught on. Slow cookers are not only great for Fall and Winter meals, but also absolutely perfect for preparing meals on hot summer days.

Not all recipes work out great in a slow cooker no matter what the cookbooks try to tell you. There are some things that better left for cooking on the stove. But there are a surprising number of really good things that can cooked up the in the slow cooker. That negative association with cheap cuts of meat? Well, that's a bunch of snobbery, if you ask me. Although my mother did cook some meat when I was growing up, she didn't cook a lot of different cuts of meat. As a result, I'm a little timid about meat, but the slow cooker helps me get over my issues.

OK, so this post isn't about a cheap cut of meat, it's actually about sausages, but I'd thought I would throw that bit in here anyway. Seems appropriate, doesn't it? When talking about slow cookers there is a general sense that anything can be thrown in. Onward to the recipe!

Sausages with Beans and Peppers. Some people would turn tail and run the other direction with from a recipe like that. But, I'm not going to think about those people because I have a lot of CSA peppers, it's cold outside, and we need something warm and yummy for a Sunday evening. 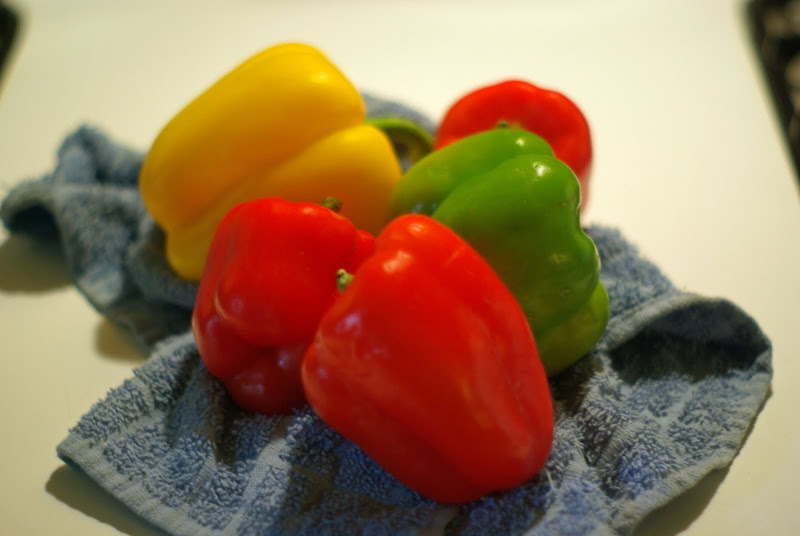 I got some chicken sausages with apple. I try a different kind each time I do this recipe. Sometimes I'll use some leftover ones from our trips to the trailer. 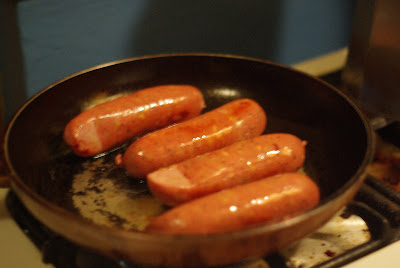 Halfway through cooking the sausages I realized I was looking at the wrong recipe. The one I wanted had beans and tomatoes in it. The one I was preparing didn't. This seems to happen to a lot to me lately. I blame it on the pregnancy. 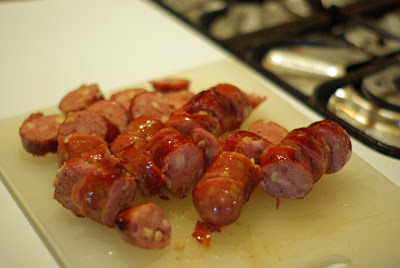 I cut up the sausages and sent the Big D to the store to get me one more can of beans. Usually I'll cook up a pot of beans ahead of time, but for obvious reasons, we had to go with canned beans. The reason: I messed up and wasn't looking at the right recipe. 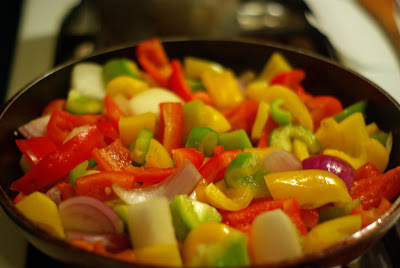 I then pulled the chopped up peppers from the slow cooker and threw them in to soften on the stove. See these recipes don't call for just throwing things in the slow cooker. There is prep required.

Here is a shot of the final results. If it looks like I've eaten out of the bowl, it's because I did start eating before I remembered to take a picture. Whee! What a dizzy girl I've become while pregnant. Nonetheless, it was yummy and perfect with some french bread! 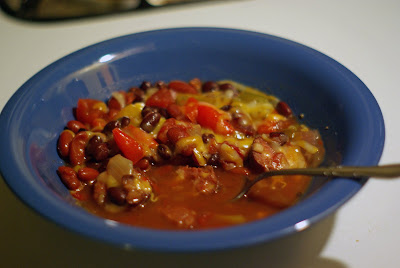 So, a recap of the recipe adapted from the above mentioned cookbook. I say adapted because I had to wing it halfway through.

Sausages with Beans and Peppers
Brown 1-2 pounds of sausages. Sliced up.
Chop 3-4 peppers, 3 cloves of garlic and 1 large onion. Saute in pan until softened.
Add peppers to slow cooker. Top with sausages, 2 cans of beans (any beans- today I used black beans and kidney beans), 1 can diced tomatoes (14.5 oz) and 1/4 cup red wine.
Cook in slow cooker 6-8 hours.
Serve with crusty french bread or maybe some rice. Or maybe, just maybe I'll make some maple hoecakes again.
Labels: CSA Eating pregnancy recipes What am I eating? And where in the world did it come from?