The third week of October is designated as Wolf Awareness Week. The International Wolf Center puts an emphasis on education in its effort to prevent the extinction of this vital species. Officially, the mission of The International Wolf Center is to advance the survival of wolf populations by teaching about wolves, their relationship to wildlands and the human role in their future. Help support their efforts by donating here or better yet, become a member of the pack! If money is tight right now (as it is for many of us) take up their suggestions for reducing pressure on wildland spaces and contributing to wolf survival:

(1) Reduce, (2) Reuse, (3) Recycle - in that order. The less we humans use the earth's resources, the less pressure we put on the wild species also trying to survive on those same resources.

Be more aware of where your food products are produced. You can help wolves by choosing responsible, environmentally friendly producers who support wolf and wildlands conservation.

Think globally, act locally - get involved in your local environmental projects or volunteer for an environmental organization near you. Everything is connected, so every improvement to the environment ultimately helps wolves.

Visit here to read more about the events in Wolf Awareness Week.

The Big D and I first learned about the International Wolf Center during an anniversary trip to Ely, MN which is where their large interpretative center is located. It was the middle of February, fairly cold and our outdoor activities were limited. 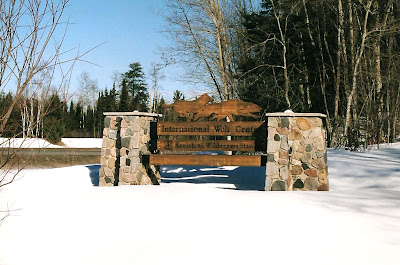 We wandered into the International Wolf Center as tourists and left as members. The wolves in the live wolf exhibit put on quite a show for us that day. Apparently there was a dog in the adjacent parking lot, and after a quick sniff of the air, the wolves gathered together and howled. It was beautiful and eerie. I was happy to be behind the thick, protective glass, but absolutely thrilled to be experiencing the cacophony of natural wolf music. 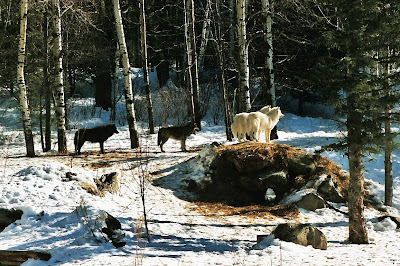 We didn't know how lucky we were until return visits where either the wolves were away in other parts of the fairly large enclosed area or lazily drowsing in the warming sun.

Our last trip was another sort of thrill as I crouched down in front of the glass to shoot some pictures. It seemed as if the wolf saw me and walked right up. I wasn't expecting her to come so close and I fell backward as she approached the window. I believe her name was Lakota and needless to say, she was beautiful. 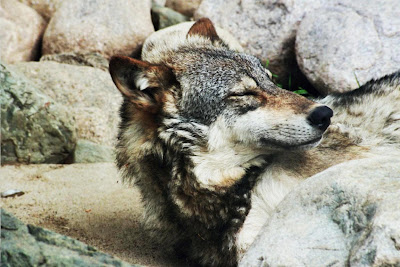 There are several wolves and they are affectionately referred to as Ambassadors. In Ely, there are tons of daily programs including films and interactive discussions with staff. The staff are friendly, knowledgeable and provide a wealth of information that really enriches the visit with the wolf pack. 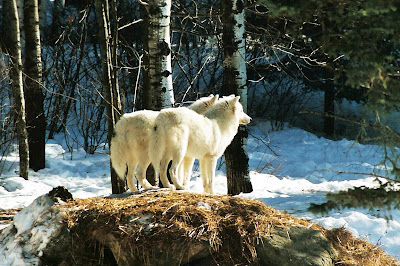 These two lovelies are arctic wolves. Notice the black spots on their tails?

Since our last visit, the Big D and I have taken quite an interest in wolves. Occasionally, at our land in Wisconsin, we hear wolves howling in a distance. We've heard the wolves encounter a flock of geese off in the woods. Once I even saw a pack of wolves off a road near the St. Croix river on our way home to the city. It happened to be the Big D's birthday and I teased him about the idea that the wolves had come out to say hello on his special day.

This video clip is a little shaky and we were at a distance from the wolves, but if you look carefully, you can see five wolves moving around. They knew we were there looking at them. They all stopped and turned to look at us. Then, they seemed to communicate a strategy for leaving the hillside. They seemed incredibly coordinated with each other.

One of these summers, we plan to volunteer at the IWC exhibit at the State Fair. I also want to find a way to contribute my skills in helping this organization. Thus far all I have done is spent an afternoon putting labels and stamps on mailings.

Do you volunteer? If so, where and what do you do? Do you have any tips on getting involved with favorite organizations? This may be Wolf Awareness Week, but it also seems like a good reminder for everyone to evaluate their time schedules and values, and see where good skills can be put towards good causes!
Labels: minnesota