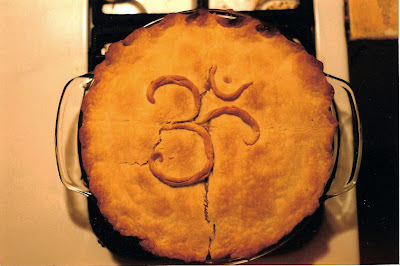 This recipe is such a treat, a hearty meal on a cool Autumn night. My version is a curried version, but I have also done it with Western spices such as oregano and basil. I use the store-bought piecrusts to cut down on prep time, and the leftover scraps of dough to make the pretty OM on top of the pie. The ingredients are measured loosely and generously, with produce picked based on what is in season. I use a can of cream soup, cream of mushroom this time.

I used the CSA butternut squash for this pie. It was the first time using this vegetable. I've seen so many others using squash in such creative ways, that I thought I'd give it shot here in the pot pie. I also used CSA potatoes and carrots. I have lots of these vegetables in the house.

Pies, whether they are fruit pies or pot pies, always taste better when made with love.

Om Pot Pie
(this recipe is just a approximation of what I do. I use whatever is on hand and smell my way through the spices)

Heat 1-2 Tbsp of olive oil in large saute pan.
Throw in 1/2 tsp of mustard seeds.
Once the seeds start start popping add 1/2 tsp of each (ground) spice; smell after adding each spice and add more if your nose says so:
cumin, garam masala, turmeric, hing (asafoetida), cinnamon.
Add minced onion and garlic, cook until soft.
Add cooked chicken (optional; this pie can be done vegetarian).
Add steamed vegetables.
Add i can of cream soup. Or make a roux.
Bring to a simmer.

Bake in preheated 400 degree oven for 50 minutes, or until puffed up and bubbly looking.
Labels: CSA Eating fall recipes What am I eating? And where in the world did it come from?