Truly, it seemed we had picked the best day for this drive. There was off and on rain, but it was more off than on and that created the opportunity for some great pictures. Also, we saw no one else on the road since getting off the main highway, so it felt like we were the only ones in the whole region.

We passed so many side roads with signs like this: 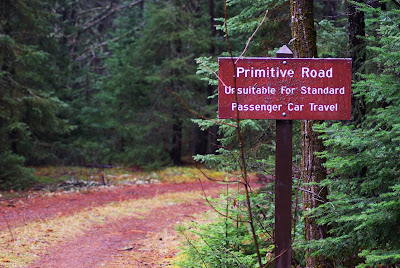 And, it was really tempting, but we only took a couple and didn't travel too far down those roads. Seeing no other cars on the main gravel road meant there would be no one to help if we got stuck. There were intermittent cell phone signals and that just increased our feeling of being off the grid; great for an adventure, just not conducive for surviving disaster.

We were on the edge of the Boundary Waters recreation area. There were no power lines or poles. A few of the cabins we caught sight of (and there were only a few) had some solar panels peering out through the woods. We were no more than 10-20 miles from Lake Superior, yet this seemed like an entirely different ecosystem - wild and untouched by human development despite the fact that we were traveling on a gravel road. The Jeep kept getting muddier and muddier and we were thankful we had plenty of wiper fluid, something we learned to stock up on before a long jeep drive, a lesson we learned the hard way. 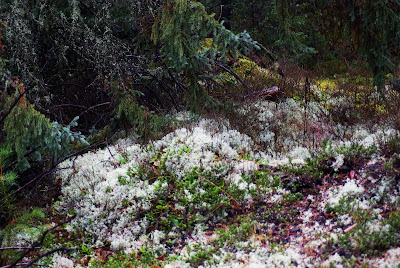 A rainy drizzling Autumn afternoon revealed so many different colors and shades of green. Maybe it was because the landscape wasn't dominated by leafy green. Whatever it was, it seemed like the moss and the pine were vibrant and shining.

There was so much plant life in different stages of growth. Tall pines reaching for the sky, little baby evergreens cradled against glacier placed boulders and colorful rocks. 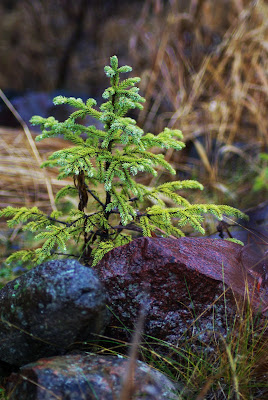 There is something so sensual about spending an afternoon like this with my lover. I had such a sense of primal, almost feral energy passing between us as we glanced over at each other after we spotted another new shade of green, another glistening patch of moss. We would recklessly jump out of the Jeep into brown mud or red mud, and not give another thought to the mess that could all be dealt with later back in town, back in the order and cleanliness of civilization. For now, it seemed that each bend in the road promised a new sensation, a new discovery, a new way to love the earth, the sky, each other. 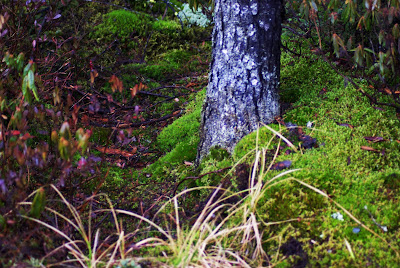 Eventually, we found a spot for lunch and for me, these jeep drives always lead to what I think of as epic lunches. These epic lunches always and only consists of sandwiches, chips, fruit and cookies, but the location is what makes it grand and out of the ordinary. On this day, we had found Crescent lake, likely a popular canoe lake in fairer seasons, but today it was quiet. We lunched in solitude, except for one another. We parked right up next the edge of the water and my eyes played tricks on me as I imagined skinny branches of trees as the legs of a gangly moose. Or a reflection in the water a loon surfacing from the lake depths.

Sepia took over as I was processing this shot. It captured the mood and glorified the fog rising over the lake. 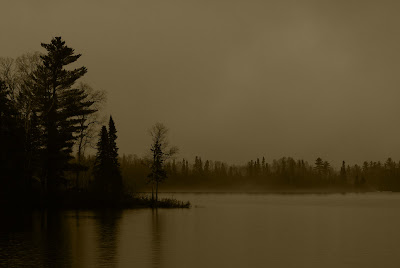 We still had another 25 miles to go on this 56 mile circuit on the edge of the Boundary Waters and on the edge of the Laurentian Highlands. We passed a continental divide that confused the rivers and sent streams flowing in awkward directions.

Suddenly, there were lakes everywhere, on either side of the road. Is that ice I spotted on some of the shallow lakes? Yes, it was and that was a frightening reminder of the next season just waiting to begin with a rush of cold air from Canada. How far were we from Canada. It couldn't have been more than 30 miles.

The freezing ice created natural jigsaw puzzles, fragile yet geometrically and chaotically beautiful. The ice was pushing the air into bubbles that appeared in cloudy pockets. 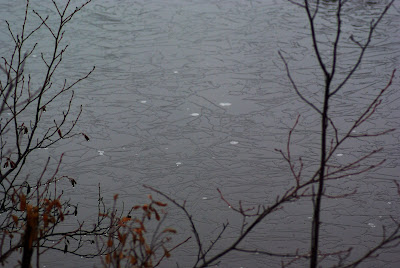 The cattails lined the edges of these lakes, standing tall and pristine in a shade of royal brown, distinctly more bold than the blanket of fallen leaves. 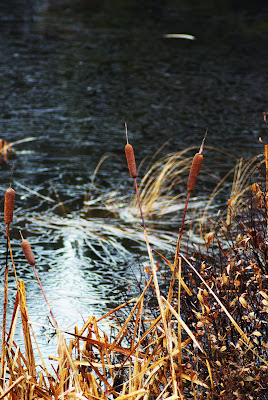 After lunch is when we started spotting more wildlife. We searched the lakes for wading moose, but luck was not with us that day. The Big D is always telling me to keep my eye out for wolf tracks because of his hopes of capturing one on film. I always snicker incredulously at this request. I was duly impressed when he slammed on the brakes and started backing up to the spot where he say these tracks. Not wolf tracks, but deer. A little too small for moose, but it could have been a small moose. 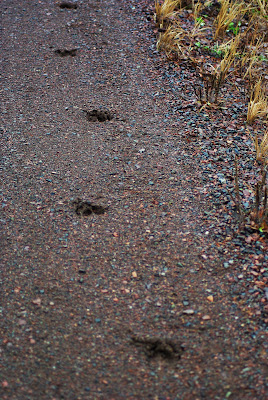 I wish that had been our only encounter with deer. I'll tell you why in the next segment of this journey. 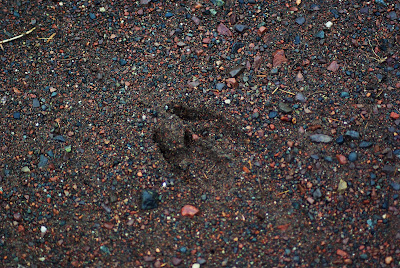 Another mile or so and we found this owl who clung precariously to the top of this tree. We stayed here for a long time waiting patiently for this owl to take flight. Instead, he (or she) stared at us and did little head slides back and forth, occasionally spinning its head all around to spot prey. Any sounds from another type of bird seemed to send this owl off on high alert, but it remained perched on that choice spot while we drove away. 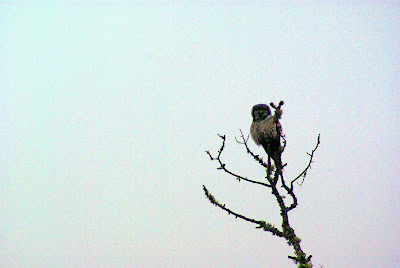 A little closer to town, we thought we spotted another owl. Here is where we encountered traffic again, but we took the risk to pull over on the side of the road on a curve with cars and SUVs whizzing by. This owl was in a distance and as I shot a few pictures through my zoom lens, I began to realize this bird was situated too perfectly in the center. It wouldn't move, or twitch when the Big D honked the horn. It wasn't bird at all! It was some sort of decoy, a plastic fake! Humbled, we started our descent into Grand Marais. 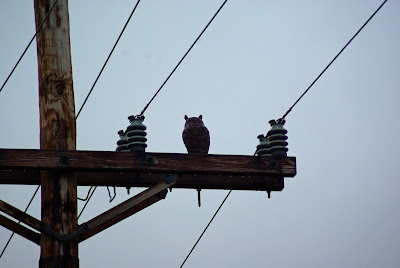 After spotting that one fake, I began to see them everywhere. I'm still not sure why they were places on these poles. Is it to scare of seagulls? Geese?

The drive down into Grand Marais was extremely foggy with little or no visibility. I'll save that adventure for the next post. If you've never been in this area I highly recommend it. But, go, if you can, during the off-season so that you can have the whole region to yourselves!
Labels: into the woods Jeep Adventures minnesota off the grid