The morning of this Jeep drive on the Sawbill Trail was all about the Temperance River. The afternoon was when we spent some time spotting local wildlife. In the late afternoon we found ourselves making the descent into Grand Marais. It is one of our favorite towns in Minnesota and we've created some really wonderful memories there. We've done one heck of a lot of our Christmas shopping in this little town where most of the stores are located right next to the harbor. It's a chance to support the local economy and a chance to find unique gifts.

The drive down from the mountains into Grand Marais was a little scary, especially when the fog got so thick the only thing we could see was the headlights of the cars coming towards us. 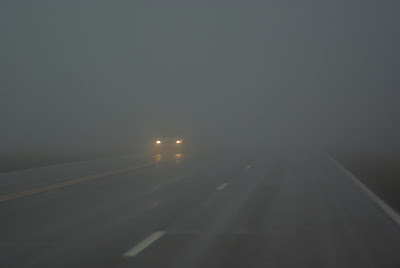 Now for those people who think of the Midwest as flat, I assure you that there are some steep areas, even some roads that have runaway truck ramps, which this one did. This is also where I realized I had some spots on my lens. 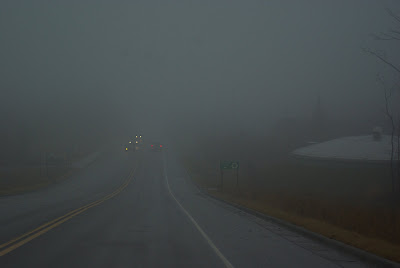 It was a relief to finally get into town and we took a short cut so some of the first sights we saw were some of our favorite places to eat. 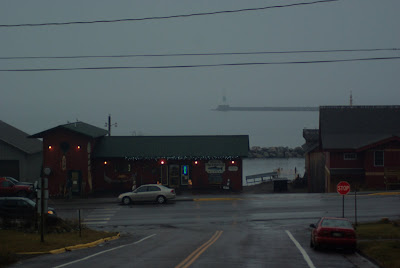 Our plan was to do some shopping, take some pictures at Artist Point, then dinner (maybe) at Sven and Ole's, the local pizza place that has some international acclaim. We had decided to buy Baby a gift and ended up picking out the cutest little pair of baby booties. 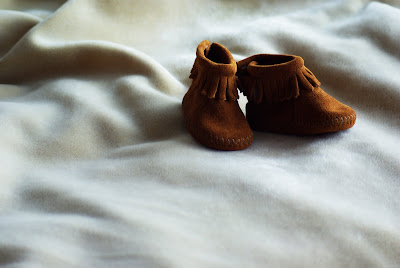 We also got presents for our parents picked out. All this while walking along the harbor. What I didn't plan for was how quickly the sun goes down this far North. We had a bit of a frantic rush to Artist Point to capture some shots before darkness settled in, but that plan got scraped shortly after we arrived, when I realized I hadn't thought through what I wanted to shoot. 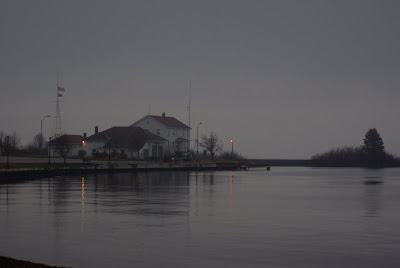 So, back to some more shopping by the harbor. 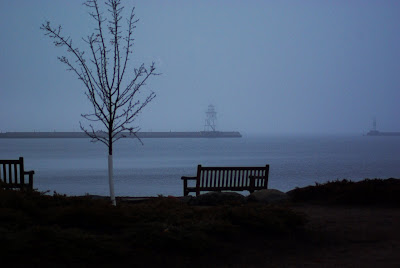 The lights seemed especially festive on this foggy evening.

But, then we were done. The only thing left on our agenda was dinner and a stop at the local co-op. While Uff-da pizza sounded delicious, it was only about 4:30, a little too early for dinner, so we headed to the co-op. The experience wasn't quite as friendly as I had hoped for, but it's always great to see this place thriving and we needed some more water so mission accomplished and we were on the road again to our resort. 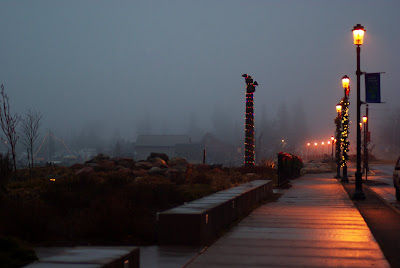 Unfortunately, before we even left the town limits, we had a very scary experience. We hit a deer. Because we were in the town limits and because it was really foggy, we were not traveling fast. The Big D did manage to skid to a stop, but then, right at the last second, the deer jumped in front of the Jeep. We were lucky that we were able to drive away. The deer, poor thing, sat at the side of the road, then got up and limped, but then, she seemed to straighten her leg out and actually jumped into the woods as if nothing had happened. I hope she was able to recover. Quite a few drivers stopped and a couple of them seemed curious about whether they might be able to take the deer home with them. Hunting season, we are told, brings the deer real close to town and real close to the road as they seem to know they will be safe. Safe from everything except cars.

It was a terrifying drive back to our resort. Everyone else seemed to be driving 50+ mph despite the fact that, in some places, the fog was so thick, we could barely see the road. Not wanting to push our luck, D kept it under 40, which helped my frazzled pregnant state of mind. But, despite all that we were safe. And very, very lucky that the situation wasn't worse. We were lucky even with the fact that we could still drive our Jeep back home. We have insurance and so that takes care of the damage to our Jeep.

This was only the second night of our Babymoon. Nonetheless, we decided we'd had enough of Grand Marais and cancelled any remaining plans in the area. Which was fine because there was enough to do near our resort.

One thing I am really grateful for was the chance to shoot this shot before leaving Grand Marais: 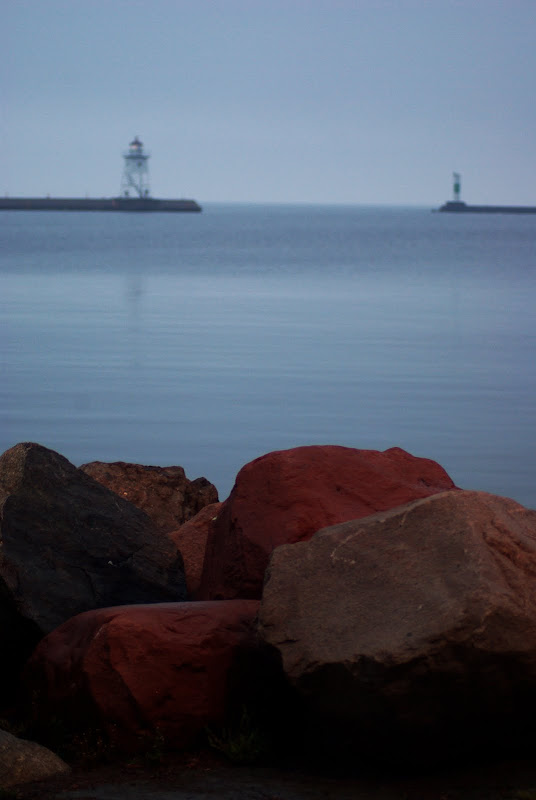 The scary experience helped me realize all that I was grateful for. Even the spots on my lens that might have ruined a whole day's worth of shooting taught me some photoshop tricks. It was a great day, nonetheless. But, I have to say, deer are no longer cute creatures to me.
Labels: fall Jeep Adventures minnesota