Date: 15 January, 2010
How far along: 31 weeks, 7 days
Weight gain: 3 pounds since last doctor's visit. I'm up to a pound a week now which is where I should be. Too bad I did 2 pounds a week for most of my pregnancy, but I do think that my weight gain is under control now.
Sleep: I have read that dreaming about labor is common in the 3rd trimester. It's the body's way of preparing for the delivery. Some say that intense dreams lead to easier deliveries. The other night I dreamt that I went into labor. I went around telling people because it didn't seem that obvious. I'm not sure how I knew that I was starting labor, but the feeling was quite distinct in my dream....Here's a strange one - my right hand falls asleep when I lie on my left side. Odd, huh? Apparently circulation gets all messed up during pregnancy and apparently mine's real messed up. I wake up most mornings with a right hand all prickly. It does worry me a little. I don't want to lose my right hand.
Best moment this week: I'm adjusting to this new diet and feeling rather good these days. I had some euphoria after my workout on Wednesday. My blood sugars were where they were supposed to be, I had a work-out high, the sub-zero lockdown of the region seemed to finally break, and life just felt right.
Movement: The Big D moved his stereo equipment down into the basement and while doing laundry, he turned up the music rather loud. [Yep, he's been doing the laundry - isn't that awesome!] He hooked up his turntable and put in some old school Marley reggae. Baby started kicking so hard it seemed like she was dancing in my belly! It was awesome! Babies apparently like reggae because the beat is the same rate as the human heartbeat.
Food cravings: Since starting this new low-carb diet, I'm hungry a lot. But not craving any carbs like bread. On Wednesday, I broke down and bought a slice of carrot cake, only ate a few bites, but then, felt the blood sugar drop an hour later. Satisfying the craving was not satisfying.
What I miss: Getting my shoes on and off quickly. Can't wear most of my boots because either the heels are too high (and they aren't really all that high) or I can't get the dang things on or off. It's funny having D pull my boots off my feet while I sit on the back stairs.
Next challenge: My mother is back in the state. I never know if she's being straight with me. She says my sister was just restricted in her diet with no pills, yet she had weekly ultrasounds. Here in Minnesota, you only get weekly ultrasounds if there is a complication like higher blood sugars. I hate the feeling of comparison between us, and my mother's cover-up of my sister's misdeeds. Also, she is arguing with me about car seats which apparently are the only thing that should be bought new. Never use a used car seat is the advise I get from my doctor, the internet and baby prep sources including Baby Center. My mother wants me to use my sister's old carseats. And, on top of all that, the crib she wants to give me is on the recall list.
What I am looking forward to: I get weekly visits with my doctor and maybe weekly ultrasounds. Can't wait to see baby every week!!!! That's the bonus for having gestational diabetes.
[new feature!] No one told me about this: Throughout my pregnancy, my gums bleed. I was told early on to have my teeth cleaned because gum disease can lead to preterm labor. I avoided it because I hate seeing the dentists. But, then, my gums started to bleed. I went in for a cleaning and found that it totally normal for pregnant women's gums to bleed. How strange.
Weekly Wisdom: "When the first baby laughed for the first time, the laugh broke into a thousand pieces and they all went skipping about; and that was the beginning of fairies. And now when every new baby is born its first laugh becomes a fairy." - James Matthew Barrie 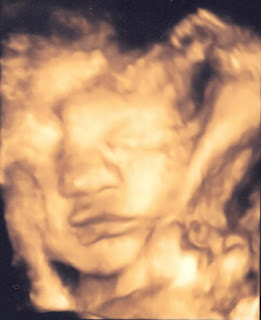 That's my baby! We had an ultrasound on Thursday and left with this 3D image. She was not cooperating! She kept her hand in front of and to the side of her face which made it difficult to get a good picture. I love it anyway!!! She has my nose and I think, my lips. D says that she looks like me. I hope she has his eyes. If we could have gotten her to turn, we may have been able to see how much hair she has, but she wouldn't turn her head. She just started kicking the ultrasound wand.

She weighs 4lbs. 7 ozs. Bigger than I thought, but we were told that's the average weight for this week of development. So, despite my gestational diabetes diagnoses, baby is growing as she should and hopefully will not grow too big. She's still a girl and all her organs are where they should be. She is only one inch below my skin. Her head is facing down where it should be. But, she looks very crowded in there. Still two months to go.

I'm scheduled for another ultrasound in four weeks. So, here's the deal. My doctor prescribed some pills to help me keep my blood sugars down primarily because I told her I was always hungry. I had only one week to watch my diet and in that week's time, I realized that I couldn't eat any carbs. My body could not process any carbs even though I had made the switch to whole grain last summer. So, I dropped all bread and pasta from my diet and now my blood sugars are well within the normal range. In fact, they are low. So I told my doctor that I was hungry in the time between my main meals and my snacks. So, she prescribed the pills so that I could eat more. I am not a fan of pills, I hate taking any sort of pill. And, I haven't taken this prescription pill since dropping those carbs from my diet has kept my blood sugars in check and I have been able to eat more because I had the space for it, so I'm not hungry anymore, like I was last week.

Next week, I'll have to talk with my doctor about all this and that's when, I guess, we'll find out how often I get to see that baby of mine.

From BabyCenter: This week, your baby measures over 16 inches long. He weighs about 3.3 pounds try carrying four navel oranges) and is heading into a growth spurt. He can turn his head from side to side, and his arms, legs, and body are beginning to plump out as needed fat accumulates underneath his skin. He's probably moving a lot, too, so you may have trouble sleeping because your baby's kicks and somersaults keep you up. Take comfort: All this moving is a sign that your baby is active and healthy.
Labels: pregnancy