How far along: 33 weeks, 7 days
Weight gain: Up two pounds.
Sleep: Strong dreams all night long. I wake up to pee and return to the same dream. I feel like everyone I've ever known in my life is showing up in my dreams. And some of them are talking to me in Gujarati.
Best moment this week: Meeting with the Doula! She's awesome and everytime I talk with her, I feel excited about the delivery!
Movement: The Baby tends to favor the right side of my belly and then, I feel lop-sided. So, I pat her little butt that's sticking out and get her to move a little towards the center. Yes, I'm a little weirded out about it and I'm still weirded about the idea that a human is growing inside me. But then, I think I'm full of divinity, both inside and outside my body.
Food cravings: Kale and carrot cake. Eggs. The doula suggested the Brewer Pregnancy Diet which recommends two eggs a day. Yum!
What I miss: Going to our Airstream retreat. Haven't been there in months, probably since October. I miss it so much!
Next challenge: Buying the baby crib. I got a voucher for my sister's hand-me-down crib that was recalled. And since D's co-workers are throwing us a shower, i have to get bedding on our gift registry. Also we have to pick out a car seat.
What I am looking forward to: Because of the doula, I am actually looking forward to the delivery!
Noone told me about this: I'd been warned about indigestion, swollen feet and hands, but noone told my hips would hurt so much. I don't have indigestion. I do have swollen feet which sucks because I just bought a $90 pair of shoes in November and now, I have to wear my wedding rings on a chain around my neck. But, my hips. Oh, my hips! They hurt all the time and by the time I'm ready for bed, they feel nervy and I limp to the bed. I do yoga, I work out, not much helps. Not even a massage from D.
Weekly Wisdom: The doula said something about planning all that we can, but also keeping in mind surrender. She said that everyone else is there to witness and help, but only I know exactly what's going on with my body. 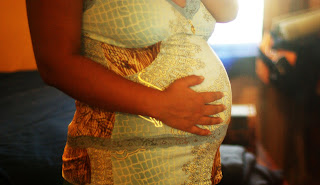 Look at my big belly! I've been wearing clothes that show my obvious pregnant belly and everyone suddenly seems so nice to me. I get called "hon" a lot when I'm out at coffee shops or stores. I'm loving this!

I was a little freaked out after the baby and early parenting classes at the hospital, just realizing that Baby could be coming in 4-6 weeks. February is a short month and I hadn't counted on that. Also, I didn't realize that going to hospital for the classes could have been laden with pressure to do things their way. I was relieved to have an instructor that seemed to be all about doing it naturally. The hospital where we are delivering has a 51% epidural rate. Another hospital close by is 80-90% epidural rate. I really want to try to do this without all the drugs: "caine" drugs as in similar chemical compound to cocaine, or morphine.

The best thing I learned at the classes was something about D! After watching one of the birthing videos, he stated that he wants to be the one to yank baby out of me (of course, after getting the go ahead from the doctor)! It was great to meet with the doula a few days after the classes, because we got to talk with her about all the after-birth procedures and our choices (more about that later.)

From BabyCenter: This week your baby weighs a little over 4 pounds (heft a pineapple) and has passed the 17-inch mark. He's rapidly losing that wrinkled, alien look and his skeleton is hardening. The bones in his skull aren't fused together, which allows them to move and slightly overlap, thus making it easier for him to fit through the birth canal. (The pressure on the head during birth is so intense that many babies are born with a conehead-like appearance) These bones don't entirely fuse until early adulthood, so they can grow as his brain and other tissue expands during infancy and childhood.
Labels: pregnancy