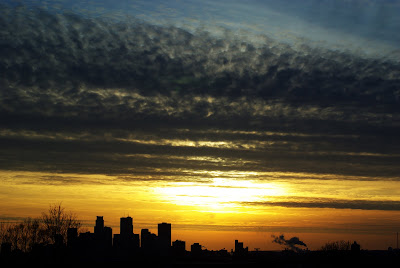 The clouds were beautiful as the sun was coming down yesterday, late in the afternoon. It's supposed to snow tomorrow and I believe these clouds are a precursor to that expected snow. When I first spotted this view, the sky was pink like it was closer to a sunset. Then, as the sun came down below the clouds, the sky took on that golden yellow typical of an afternoon sun. It was worth to spend some time shooting out in 13 degree weather. It felt like yoga. After having a very strange day, the time spent shooting was a rare moment of relaxation.
Labels: Northeast Minneapolis on the grid The Year of Lotus (daily photos)