Date: 5 February 2010 - OMG! It's actually February already!
How far along: 34 weeks, 7 days - OMG! Tomorrow it will be 35 weeks already!
Weight gain: Two more pounds. Yikes! I'm only supposed to put on one pound a week. But I haven't worked out in over a week, so I'm sure that's got a lot to do with. Funny things is that I've finally decided not to freeze my account. I decided to work out as long as I can. Yet, I haven't been to the gym since that day I made that decision.
Sleep: Strange dreams. Last night I was at a play and all of sudden the actors came out into the audience and grabbed whatever food or beverages there was. I had a bottle of water. Someone took it and in thanks, I was given a t-shirt with the play on it. It showed my belly quite nicely. There's been lots of Indian Americans and African Americans in my dreams lately. Does that add another layer to the whole idea of dreaming in color? As a side note, when we arrived at the weird-ass surprise baby shower that D's family held, there were balloons with white babies on them. I kept thinking, don't they know we ordered a brown baby? So, all the people of color in my dreams are nice balance to that strange shower day.
Best moment this week: It's been a tough week so not many great moments. It's always great to wake up to snow and it's been snowing yesterday and today. And, it's warm so that just makes life more bearable. Oh, i just thought of something. We bought a Jeep stroller. Fun! And we found a carrier that will allow us to cross country ski while pulling baby behind us. It's a bit expensive, but it might be something we need to save up for because both of us love to ski!
Movement: Some days she kicks a lot, some days not so much. My doctor has reviewed how to count her kicks so that I don't have to worry so much if it's slow kicking day. When she does kick, it's more than ten an hour, which is right where it supposed to be.
Food cravings: Brownies. One of D's employees is a great cook and baker. He brought in brownies and I begged D to bring home two, one for me and one for the baby. Yummy! I think this cook/baker should apply to Hell's Kitchen and apparently several other co-workers have been encouraging him to do so. What fun that would be!
What I miss: Being able to roll over in my sleep easily. And putting my nice boots on by myself. I can only wear them if D is around, cuz he has to help me put them on and take them off.
Next challenge: Getting the crib set up and the bag packed. It just feels like there is so much to do right now and all I want to do is sit and knit.
What I am looking forward to: Having the baby room all set up.
Noone told me about this: The PUPPPS rash. See below. I guess Baby center did tell me, but I got the email a few days after the rash appeared on my hands.
Weekly Wisdom: A mantra for labor: "All I have to do is keep my mind out of my body's way of the work it knows so well to do." 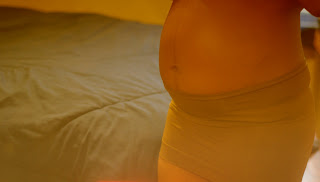 The other day I was telling someone that I thought I would have a bigger belly by this time. And then it seemed like the very next morning, my belly just seemed huge. It's funny how things happen just all of sudden. Or perhaps, it's that I see it differently.

I've been lucky to not have experienced the heartburn and indigestion as much as others, but I do have my own set of woes. My hip is constantly aching. I have that PUPPPS rash all over my knuckles and on the back of my arm pits, and on my butt and inner thighs. Holy itchy rash! I haven't had the breathing troubles yet, although I do get out of breathe fast, just not that general squashed lung thing that many short women have. Seeing the women in D's family last Sunday, I got to hear a lot of their pregnancy woes. It's interesting to me that even though I constantly hear that every pregnancy is different, many of these women assumed I had all the same woes as them. But, then I also realized that many of these women did not exercise at all during their pregnancies.

I bought an exercise ball the other day to take to hospital with me. Also, to help relieve some of that hip achiness.

I'm in-between sizes right not, so that's a bit uncomfortable when dressing. I bought a bella band, but that can slip around too. I guess this last month is going to be all about discomfort. Fatigue has definitely settled in. A month ago, I was happy to be busy, now my body is slowing down.

And, the irritability. Poor D! He gets to be the source of all my anger and frustration venting. What a great guy! I hope I don't wear him out before Baby gets here. She's going to need his patience more than I do!

From BabyCenter: Your baby now weighs about 4 3/4 pounds and is almost 18 inches long. Her fat layers — which will help regulate her body temperature once she's born — are filling her out, making her rounder. Her skin is also smoother than ever. Her central nervous system is maturing and her lungs are continuing to mature as well. If you've been nervous about preterm labor, you'll be happy to know that babies born between 34 and 37 weeks who have no other health problems generally do fine. They may need a short stay in the neonatal nursery and may have a few short-term health issues, but in the long run, they usually do as well as full-term babies.

By this week, fatigue has probably set in again, though maybe not with the same coma-like intensity of your first trimester. Your tiredness is perfectly understandable, given the physical strain you're under and the restless nights of frequent pee breaks and tossing and turning, while trying to get comfortable. Now's the time to slow down and save up your energy for labor day (and beyond). If you've been sitting or lying down for a long time, don't jump up too quickly. Blood can pool in your feet and legs, causing a temporary drop in your blood pressure when you get up that can make you feel dizzy.

If you notice itchy red bumps or welts on your belly and possibly your thighs and buttocks as well, you may have a condition called pruritic urticarial papules and plaques of pregnancy (PUPPP for short). Up to one percent of pregnant women develop PUPPP, which is harmless but can be quite uncomfortable. See your practitioner so she can make sure it's not a more serious problem, provide treatment to make you more comfortable, and refer you to a dermatologist if necessary. Also be sure to call her if you feel intense itchiness all over your body, even if you don't have a rash. It could signal a liver problem.
Labels: pregnancy