This is beginning to become a knitting blog as much as it is a photoblog and a general life blog. It used to an Airstream blog, but we haven't been to our retreat since October. Oh, how I miss it. I guess I'm easing that misery with the knitting. Does knitting = nesting? If so, than I'm definitely in that nesting phase.

So I got this baby ear flap pattern off the internet. Although the knitting went fairly fast, the finishing took much longer. It was the project that inspired me to try blocking for the first time, but of course, it took me a couple weeks to work up the courage to do it. Now I'm a blocking fiend. 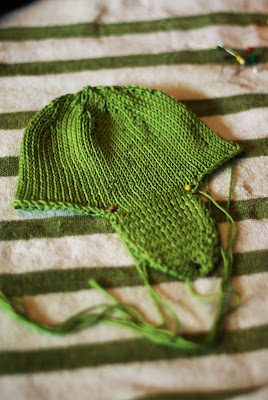 Next up, I had to weave in the tails and figure what sort of tie I wanted to make. I was considering a braid, but a friend of a friend suggested that making a cord would be stretchier. Again, I put aside finishing the hat for another couple of weeks. Then learned how to do an I-cord while knitting a baby hat for my second cousin's new baby boy (now that I think a little more about this, I think he might be a third cousin, because his father is my father's nephew. Huh?).

I wasn't sure how long to make the ties, but I figure if it's not long enough, I can always add some tassel-like things to the ends to extend the length.

Voila! I'm so happy with the hat, even if the decreasing is a little messed up. But, who's going to notice? I know that next one I make will be better, so I'm just going to sit back and enjoy this one for a while. This one matches the coming-home outfit that has been picked out for Baby. 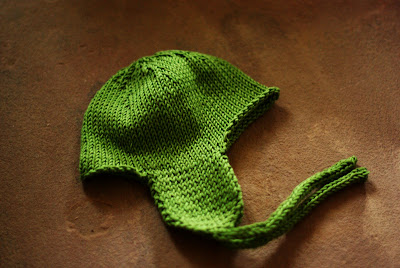 Gotta put bunny to work. Can't just sit and look all pink and cute in this house. Gotta earn her keep! 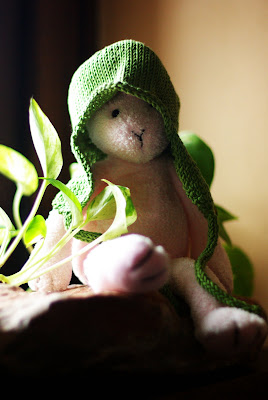 Labels: Knitting isn't just a DIY craft - it's a survival skill Putting the "Om" in Mom