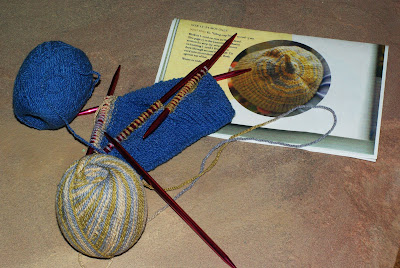 I struggled and struggled to get this project going. My second cousin and his wife just had a baby boy a couple of weeks ago, and so Baby Dev was the inspiration for this hat. I had to use double-pointed needles, which I have done a number of times for the fingerless gloves I've made for myself and all my college friends. But, these needles were bigger and slicker, and oh man, did I struggle. I struggled the night before with at least half a dozen restarts. I finally got it going at about 10:00 at night. I was hoping to have at least the first two inches of the primary color done that night, but I didn't finish that until the next morning. Put in a Meryl Streep movie I hadn't seen on Netflix instant play and knitted all morning. 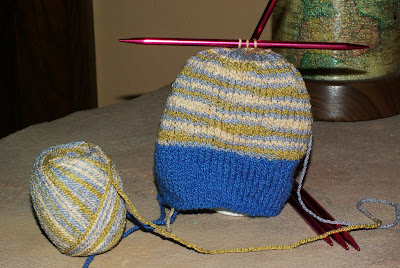 An hour before D was coming home from work, I called and suggested we order take-out. But then, did get a little inspired when the finishing touches of the stretchy baby hat went by quickly. I realized I had everything but the meat for beef stew. And, D was going to go work out, so i had a bit more time to run to the meat market to pick up beef stew pieces. Hat done. Stew bubbling on the stove. 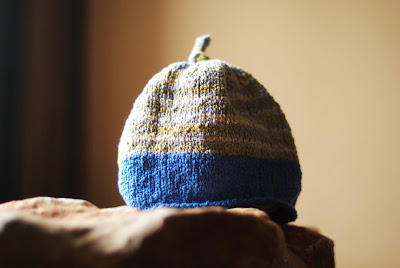 The therapy did this woman some good! Yeah! I'm so pleased with the final results. I'm going to make another one with the colors reversed, right after I finish one for my own baby. Taking a cue from Sasha Obama, baby girl's hat will be pink with an orange/pink variegated yarn on top.

So, Dr. G, if you are reading this, that is why I didn't call when I wanted to. Hope you understand, but you are such a diva that I'm not worried.

About the shower - the weird-ass surprise baby shower. First of all, who throws surprise baby showers? Who throws surprise baby showers at a bar? D's weird family, that's who. In his family, there are four January birthdays and they've been celebrating them at a bar since the year I joined the family in 1994. In the last 4-5 years, D's dad has been putting together a brunch instead of a bar night at a restaurant by the river. He rents the banquet space and the restaurant caters the food (3.2 conventional food). There is a bar in this space and everyone starts drinking at 1:00 on Sunday, right after church. When we arrived there were balloons and a cake set up on the opposite wall of where we entered and just 15 feet from the bar (full bar, I might add, bartender and all). We avoided it until after brunch. We were beckoned over to open presents. Noone sat with us, just a couple of cousins popped over every once in a while to snap pictures. By the time I got to the cake, I realize there were just a few pieces left, so people obviously has eaten cake (and it was situated next to the bar), but noone came over to us. It was oddest, weirded thing ever!

Did I tell you we had registered the day before. Oh, hell yes, we were in consumer hell, registering at this store and that one - for the shower we had planned with D's mom for the Feb 20. Did anyone tell us that there was a shower planned for the very next day? No. Did anyone tell these people that we were registered? No. And top of that, I felt like some people were pressured to give us presents, cuz you can't show up for the brunch if you don't bring something for the shower, can you? Not if you're good Lutherans trying not to create waves.

And, what about those people who weren't informed? Let's just say there were several uncomfortable moments when we tried to explain to them that we hadn't been told either, which they found hard to believe, because, of course, who throws surprise baby showers?

Now do you see why I needed the knitting therapy?