I still haven't written about my birth story. There is so much that happened that day and night and then, the next day. I don't know where to start. Of course, I could start at the beginning, but I'm just not there yet.

So, let me start with this, which happened the night after our little Pumpkin Pie was born. She was a preemie, born a month and three days early. I refused the epidural. Then, the attending doctor suggested a narcotic, which I also refused. Then, she recommended morphine. To which I also said no. I gave birth to my daughter without any pain killing medication.

The next night, my Ob/Gyn came in to see me and the baby. She was livid when she walked into the hospital room. They had attached a something to my daughter's pee-pee area to catch her first urine, which we were told was standard procedure for preemies. My doctor was angry with this decision. She informed us that they wanted to catch her first urine to test her for drugs. Apparently women who use drugs during their pregnancies almost always have preemie babies, so they test preemies for a variety of drugs. My doctor was angry because I was someone who had refused all the legal drugs, therefore she saw no reason to test my baby for other drugs.

She stated that we should ask them to take it off. After she left, I spoke to the nurse who gave us the runaround and wasn't accommodating our request. In the middle of the night, after a nurse change, we got our delivery nurse who was also angry about this decision to catch the baby's first urine. She thankfully had the thing removed. But, apparently they still had the chance to test her urine. 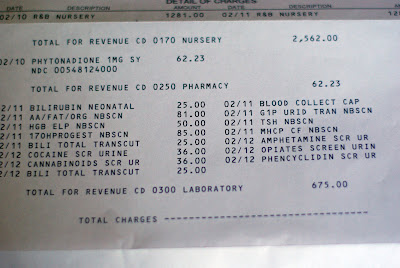 As you can see they tested my baby for cocaine, marijuana, amphetamines, PCP, and opiates. Makes me wonder what would have happened if I hadn't refused the epidural which is a "caine" drug.

The other annoying thing is that they didn't actually catch the first urine. They took the first plastic bag off because there was a drop of urine in it, but not enough for the lab test. Right after they took it off, she urinated. Then, they put another one on. The plastic bag is attached directly to her labia with an adhesive. The change in bag irritated her skin and she cried most of the evening and into the night. She cried and fussed right up until the awesome nurse came in and took it off.

I told this nurse that I had spoken to the previous nurse about this situation and that I got nowhere with her. Alyssa's response: "I'm not that nurse" with the sassiest, sweetest voice I ever did hear.

I post this here to show that the world that indeed, I refused the legal drugs and the illegal drugs.

Future mommas-to-be who may give birth to preemies, take heed! Don't let them do this to you baby!
Labels: minnesota pregnancy