Return to the Retreat

I can't remember the last time we traveled up to our Airstream retreat. Must have been sometime in October, before deer hunting season begins in Wisconsin. Back before Baby Lotus Bud, this would have been highly unusual for us. Winter never seemed to prevent us from heading up there. The only major deterrent was wood tick season, but I got over that soon enough when I learned how to be vigilant about checking for those evil things. By the way, Pumpkin is now going to be the Baby Lotus Bud. It seems like an appropriate change for Spring as pumpkin is a fall treat.

The ride up to the trailer was good, the Baby Lotus Bud slept most of the way there. We needed to head out early because we wanted to buy some meat from a farm that shows up at the summer Farmer's Market and every other weekend in the winter outside the town's information center. Futility Farms supplies the meat we buy and we tend to load up as much as our little city freezer allows. The only reason we got out of the house so early, early enough to make it there by noon, was because the Baby Lotus Bud let us sleep for four and half straight hours the night before. 4 1/2hours! Seemed like such a treat!

The weather was fairly warm and the snow had melted weeks before. We could tell this from the level of water on our property. There wasn't a significant amount. The road by our property was so inviting. 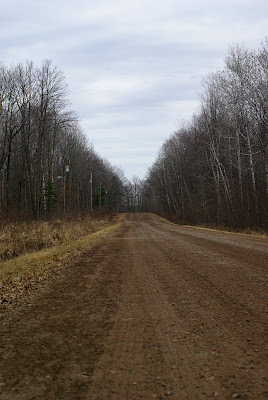 The door leading into the trailer was just as wonderful. I couldn't believe how good I felt. It was like coming out of hibernation, or what I imagine it would be like to get released from jail. All the open air, the wind, the smell of Spring emerging. A place so quiet that I would tell whether the occasional sound of distant truck was an automatic or a manual transmission. Birds were chirping, the wind was rustling the remaining Fall leaves, squirrels were jumping through the ground debris. 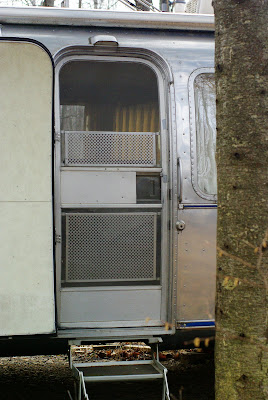 I carried the Baby Lotus Bud around all over our property, whispering in that tiny ear that it all belonged to her. It was because of this that we decided to have a baby, someone little to share our retreat. 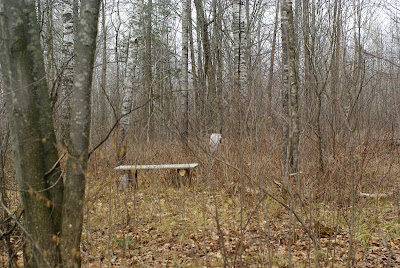 I carried her down the path that lead to the firepit and made mental notes of all that needs to be cleaned, cleared or repaired this year. We need to gather fallen branches, re-build our outdoor kitchen counters, clear our little paths through the woods. But, all that can wait until later in the year and maybe even after wood tick season. 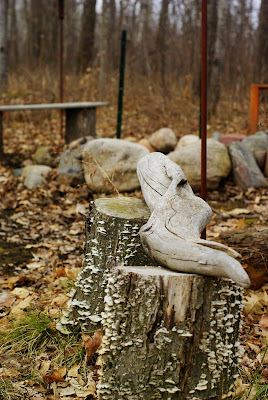 I showed her the firepit. I stood there remembering all those great nights we had cooking and grilling, occasionally with friends and family, but mostly just the two of us, the Big D and I spending time together, preparing a meal, sometimes simple and rustic, other times elaborate and extensive. 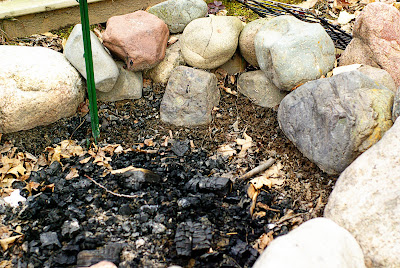 The only sad thing about that day was to see all the prayer flags down. We had finally strung four sets in all four directions. And, all four had been torn down by the wind and some scattered throughout our property. 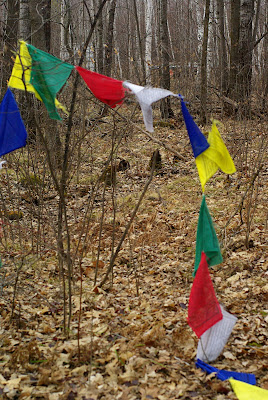 We'll have to take some time to clean the outside of our Airstream trailer, a task we usually do when it is raining. We have no running water on our property so we take advantage of the nature's abundance, donning raincoats and scrubbing the place during a rainfall. The inside was not too bad, a little bit of mice evidence, but nothing not manageable. 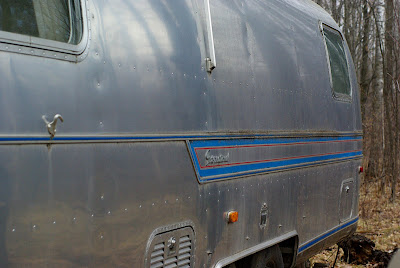 We didn't spend the night. I wish we had, but the weather forecast had called for rain. And, although we did not get any rain, the temperatures were expected to drop into the twenties that night. We headed out in the early evening and made it back to the city just after dark. 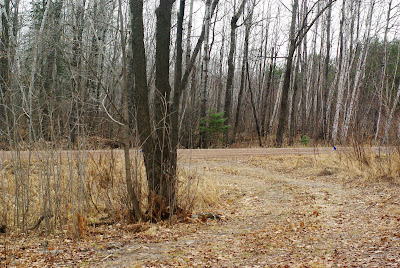 I get such a sense of freedom when we head up to the Airstream retreat. It's quiet and at the same time, full of the woodland sounds. It was a relief that the experience went well with the Baby Lotus Bud. She'll grow up here and for that I am glad. I guess I would say it was the manifestation of a dream.
Labels: Airstream Trailer Life into the woods