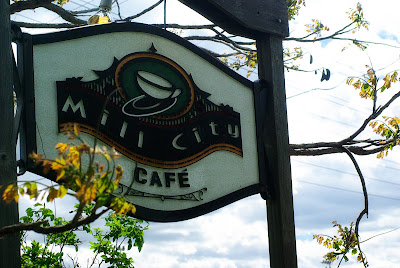 Instead of heading into St. Paul, we decided to try out a breakfast place in our part of the Twin Cities. I can't believe how many times we have driven just a couple blocks away from this place not knowing what was there. The Mill City Cafe offered a breakfast that was delicious, an atmosphere that felt like "contemporary" Northeast Minneapolis (if you know what I mean, more on that later), and decor that included choice pieces that exemplified the neighborhood's Arts district. 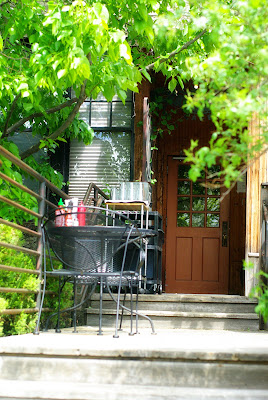 The Mill City Cafe is located in one those old NE buildings which houses a number of art studios. The guy that introduced me to this place told me to suggest to the Big D that he use the bathroom because apparently it's located in a three-story elevator shaft.

Walking into this place is like walking into a sanctuary. Along with the peace and tranquility, there is also the possibility for inebriation, something I heartily look forward to sometime in the distant future when I am no longer breastfeeding the Baby Lotus Bud. How I miss those weekends when brunch included a Bloody Mary with a beer chaser; those times when there were always four glasses per person on the table - water, coffee, bloody mary and, of course, the beer. Don't let me get started on that because I'll just whine and yearn and ache and want. As it was, I was taken in and totally hooked by the decaf americano. Yum. So much better than decaf coffee, although I'm willing to bet that this place serves up a good one. 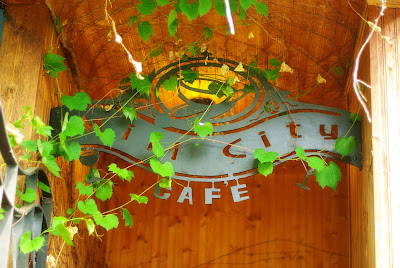 As usual, I did not think to take a picture of our food until we had completely wiped our plates clean. The Big D had the Ecuadoran Baked Eggs which he devoured in a flash, while I went safe (again) and ordered the biscuits and gravy. But, these were no ordinary biscuits and gravy. Oh no. I opted for the portabello mushroom gravy to go alongside my fresh made biscuit and fluffy scrambled eggs. The mushroom gravy had the same heartiness of sausage gravy and just about the same kick. That plate could possibly be the best dang biscuits and grave that I've ever had.

The Big D loves a place that has hot sauce right on the table and this place had two different bottles of the hot stuff. He likes his food spicy! 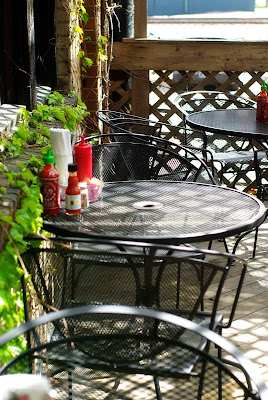 The outdoor seating was totally wonderful but unfortunately it was too windy for us that day. I'll back for it and again, I can't wait until I'm sitting out there sipping my Bloody Mary. 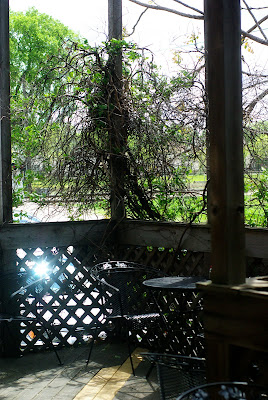 So, when I say it has that "contemporary" Northeast Minneapolis feel to it, I mean it has all that that makes this neighborhood great. The old building, the new art, the great food, the interesting people. You see, my in-laws are Nordeasters, part of the Norwegian/Swedish crowd that occupied this part of town alongside lots of other European immigrant and working-class communities. My father-in-law is a retired Minneapolis cop and he drives us through the neighborhood like he's on patrol. The Big D has picked up this habit, taking every side street and never taking the same route twice. When we go out with his parents it is to all those old NE joints where the food isn't always the healthiest, but it's their habit, so we do it. It's to those places where the crowd isn't always diverse to this desi girl, but to them it is when you consider there are Germans, Poles, Swede, Norwegians, etc.

The area is still full of immigrant groups and working-class folks, but now that includes Somalis, Mexicans, Ecuadorans, Lebanese, African Americans, Native Americans, Tibetans and Afghanis (the list goes on and on). Along with these communities come great places to eat including many ethnic restaurants along with hip, funky places like the Mill City Cafe. This restaurant is filled with a lot of great artwork: painting and sculptures - yet another cultural aspect of NE Minneapolis that has revitalized the area. All this right alongside the railroad tracks.

And now, Northeast Minneapolis has one more resident who adds to the diversity of the area, some little one who is part South Asian - my little Baby Lotus Bud! There were two desi girls at the table for breakfast this weekend. 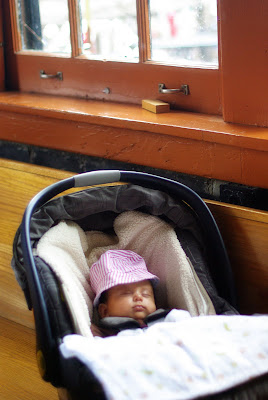 Labels: Northeast Minneapolis The Twin Cities What am I eating? And where in the world did it come from?