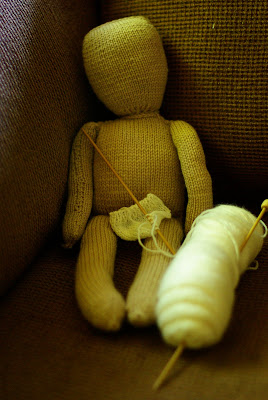 The dolly is coming together rather quickly. I've moved on to clothing for Tina, starting with the panties. I really like saying panties. I'm also going to make a V neck top and a skirt. I'm learning some new stitches such as the moss stitch which is really quite easy and simple with pretty results.

I have to admit that I'm stumped when it comes to attaching hair. The directions in the book are good, but they always seem a little lacking for someone that is relatively new to knitting something other than a scarf. I'm going to wait until Cornelia from Bella Lana is back from her trip to Ireland so that I can get her help. $11 yarn cannot be wasted on inexperience.

And the eyes? I want so much to do this right. I want to sew almond shaped eyes like those of my precious Lotus Bud. I'll probably put that off for quite a while too.

Officially, yes, I've gone ahead and named the dolly Tina. Lotus Bud can change it later if she wants to, but Tina is Tina to me.
Labels: All things Baby Knitting isn't just a DIY craft - it's a survival skill