Another project for a busy Lotus.

So, what does a Lotus who happens to also be a Gemini do when she is busy? Like super, crazy busy?

She takes on a new project.

Yep, that's me. I know I'm getting back to my usual pre-baby neurotic self when I find myself taking on new projects and actually busting my ass to complete them. Gone are the years that I wallowed in self-pity and sat around eating minty bon-bons.

Just kidding on the bon-bons.

Really. I don't even know what a bon-bon is.

I wanted to blog last week, but the Big D was out of town and I had Baby all to myself. 24/7. And in case you are wondering, I think I did great! I really think I'm getting a handle on this whole mommy thing!

On to talking about my new project - Freezer Paper Stenciling.

I was sick of not finding the right clothes for the Baby Lotus Bud. When I did happen to encounter something cute, decent, even witty, of course, the piece was well over $20. There is no way, no how that I will buy something that expensive for a baby that will wear it for about a month.

Plus, I tend to dress her in a onesie and a pair of pants quite often. We've gotten a lot of dresses from friends and family, but honestly? She looks a little butch in those frilly dresses. Even the green ones. So, onesies, it is.

I learned how to do this relatively easy project here. It is an easy project but it's also addicting. The start up cost are minimal. I'd say the onesies (or t-shirts) are the most expensive items and you've got to be sure to get ones that don't shrink a lot. Carter's is a decent brand.

Here's a shot of my supplies. 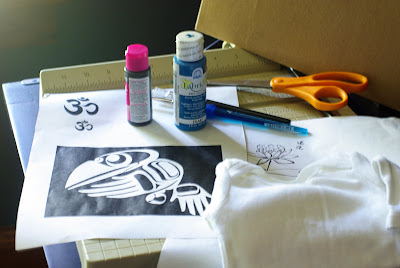 The fabric paints are a little over a dollar per bottle. Stencils can be found online. That big raven in the picture is for a shirt for the Big D. He's got a thing for crows. So much so that our daughter's middle name is Raven. 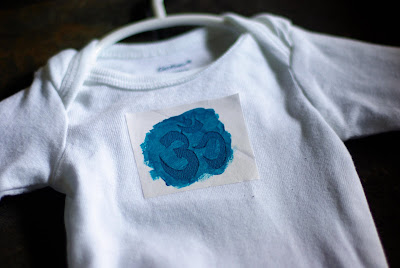 The first shirt was an "Om" for yoga class. I tell ya, she's the cutest, most stylin baby in yoga class! But maybe I think that because I'm her mommy. 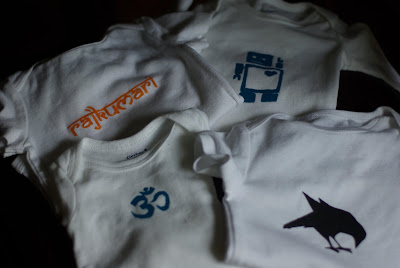 An alternative to using picture stencils is to check out funky fonts to print out words for the shirts. I found the Samarkan font that resembles the Hindi script (Devanagari) and printed out the word "rajkumari" which means princess in Hindi. Whereas I would be mortified to dress my daughter in a shirt that says "princess" somehow "rajkumari" doesn't seem to terrible to me. 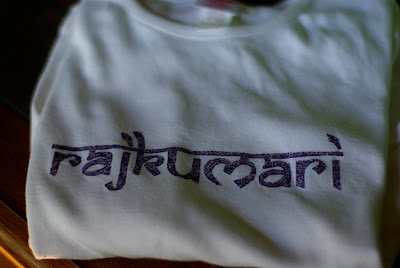 Maybe it's because my mother used to call me that except that the way I remember it, she made it sound like she was swearing at me. I had no idea that it meant "princess" until I was older.

Like I said earlier, this project is addicting. Once I got started, I couldn't stop. I made one for the daughter of a friend who is a drummer. 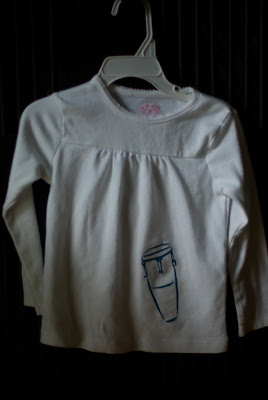 Cute, isn't it? After I gave it to her, I realized that it was far more appealing to my friend who is the dad. No problem, mon. I'll just make another. With flowers. 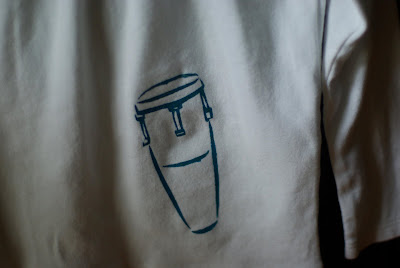 For Emerson. Hopefully Lani won't see this post before she receives the shirt in the mail. Fingers crossed. 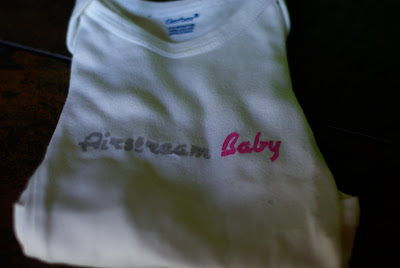 For my nephew who is nuts about karate. Ka-Ra-Te. 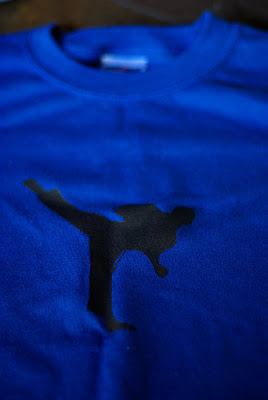 For the Big D. 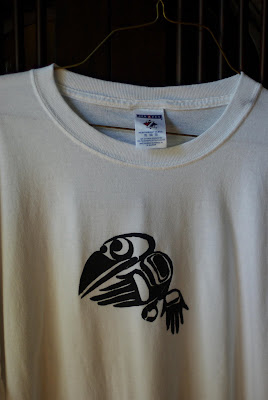 For the granddaughter of a blogging friend. 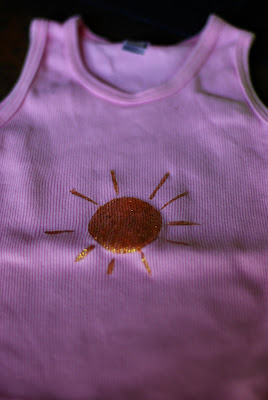 Now I have to figure out what I want to do for myself. But, not until I have finished the other eight that I have plans for.

This is so addicting!
Labels: All things Baby DIY Crafts Putting the "Om" in Mom