The beginning of each month gets incredibly busy for me. I have Board meetings, committee meetings, a community meeting, yoga, and deadlines. And, in case I forget (like I actually could) I have a baby to watch and grow. Couple all this busyness with my sudden burst of creativity and energy that comes right after a new moon, and suddenly I'm just feeling nuts about doing absolutely everything that I want to do, then feeling like a failure because I only got some of it done. I only get done the necessary meetings, once-a-week yoga and the baby watching and growing.

I'm working on being kinder to my busy self. I'm working on letting go of some things and reassuring myself that those creative projects I did not get done will just be richer and more satisfying after they stew for a while in my brain, unexpressed and unfinished.

I just realized that my camera battery needed recharged. Actually I knew that since last Saturday, but I never even pulled it out of my purse to use and be reminded that I needed to charge the battery. How sad is that?

I'm a little like this sculpture at a nearby park that spins in the breezy wind. Spinning without control, pushed around and around by an uninterested burst of air. 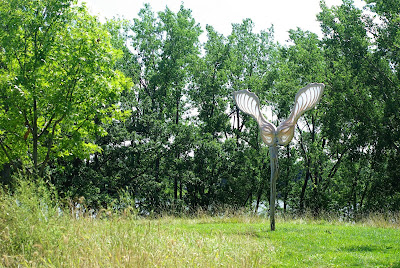 OK, enough of the complaining and the possibly bad metaphor for my busy life.

Just this morning I booked reservations for a week at the North Shore of Lake Superior. Last year this is where we went for a Babymoon. Now, this year we will be taking the Baby Lotus Bud. This will be our first family trip and we've decided to go over the Thanksgiving week. I'm going to try to pull together a little Thanksgiving dinner up there. The resort where we usually stay has nice one-bedroom condos with well-appointed kitchens. And, fantastic views of the Great Lake. Hopefully there will be a big storm brewed up the Gales of November and we can get an amazing show of waves breaking over the rocks right outside our condo. I'll share more of our plans as the date gets closer.

OK, busyness aside, now some randomness.

Have you seen Eat, Pray, Love?

I haven't seen it yet, but never really was a movie theatre goer. Someone that the Big D knows may be able to get it on DVD for me, so I'll just have to wait.

I really enjoyed the book when it came out in paperback years ago. I liked the idea of it, but it was very clear in my mind that I would never take a trip like that which Gilbert described in the book. I happened to share the book with a friend who was at the beginning of a messy divorce. She hated the book, blogged about how she hated it on her fairly popular blog, divorced the husband and promptly moved out of Minnesota with my book in tow. Or, at least I'm assuming she took the book. I guess she could have just thrown it away.

Yes, that makes more sense. She didn't like it so why would she take it with her? All I know is that I don't have it anymore.

I felt a little bit...ashamed. Embarrassed that I liked the book, ashamed that I wasn't more critical. But, dang it! I genuinely liked it even if there were some parts that made me squirm. I think that anyone can critique a book, but only a few can pull out good, useful, relevant to one's life, parts of a book. I spent too many doctorate seminars with people who spent an hour and half trashing a book or an article. It usually left me feeling like I hadn't read the same article/book.

Anyway, so, I wanted to read it again and remembered why I didn't have it, pushed down my throat that rising swell of shame and decided to get it from the library. There are approximately 5 billion people on the waiting list. OK, there is only 525 and I'm now down to 163 on the list.

It's still going to be a few days. You think?

While I'm waiting, in the meantime, I stumbled upon Drink, Play, F@#k: One man's search for anything across Ireland, Vegas, and Thailand.

After spending a few weeks reading Jane Eyre, Wide Sargasso Sea (for which I did not write my review, sorry!) and Crow Planet, I decided I needed something a bit trashy. Drink, Play, F@#k was indeed trashy, but actually a bit better than I expected. The Drink and Play sections actually had a bit of spirituality in it even if it was found in a drunken stupor and a roulette wheel. The F@#k section ended up being a little bit sweet. I finished the book in about a day and half, and it left me feeling like I want to Drink, Play and F@#k - all in moderation, of course. The Play part might be a bit hard to manage, but that section was all about seeking things that makes one happy and not worrying too much about the consequences, so maybe I can pull in a little bit of Play into my life.

Now, I'm moving on to some David Sedaris and oh yes, I've got to finish up Crow Planet.

I suddenly find myself with a huge stack of books to read. They all seem very interesting, but my problem is that I just discovered my television again. There are so many good films on Netflix Instant Play.

A recent one I was told about that I'm watching in parts is the Gleaners and I. Have you seen it? It's so very interesting. It's a documentary of gleaning activity in France. Gleaning is the act of collecting leftover crops from farm fields that have already been harvested for commercial purposes. There is a scene with potatoes. Hills of potatoes dropped off by processing plants that cannot sell large or oddly shaped potatoes to grocery stores so they just dump them in fields. Individuals and charitable organizations collect these discarded spuds and usually walk away with hundreds of pounds of perfectly respectable potatoes. There is also a segment on a 2 star Michelin chef who gleans all his ingredients. Also included in this documentary are urban folk and artists who search the trash dumps for food and materials.

Gleaning is a much better word for dumpster diving, isn't it?

I started thinking why don't people glean farm fields here in the States? Then, I remembered that the bulk of agriculture in this country is dedicated to monocrops, usually corn to produce high-fructose corn syrup and feed for the beef industry.

Maybe I'll have to move on to reading some more Michael Pollen and see if he's got anything to say about gleaning.

There. See. My post about nothing ended up being about something, didn't it?