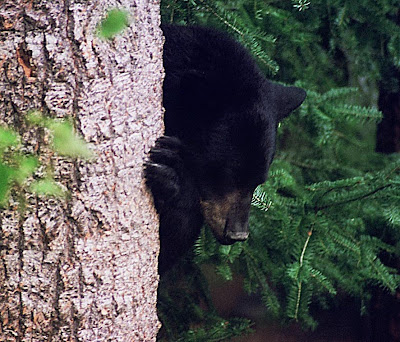 I see bears. I see a lot of bears. I used to think this was a relatively common thing but then one day I talked to a park ranger at a state park where I had just seen a bear and she said she had never seen one. She cleans up after them all the time as the bears in the are tend to raid the garbages. She was not happy with me and was totally not interested in hearing my story. She had worked for the state park service for over 20 years and never seen a bear.

I, however, whether good or bad, seem to see a lot of bears. I used to think I attract them. I do not put food out for them. I never leave food unattended when I am camping. I don't wear any scents on my body nor do my shampoos or lotions have any scents. They just appear before me. A lot.

One night I decided to list all the bears that I had seen in the wild. I am not including the half a dozen bears I have seen in zoo or captive settings, for obvious reasons. I am also not including the 50+ bears I saw at the Vince Shutte Bear Sanctuary. Which in retrospect was quite a scary experience. If you ever plan to go, you must plan for the end of August as this is time when the bears are loading up for the winter, getting fat, going on major food binges.