The Big D was out of town for a little while and I had decided to make a meal with ingredients that he didn't care for, specifically olives and capers. He'll eat capers but will not touch the olives. I made an eggplant caponata and it was yummy. I had planned on getting a bottle of wine to go with the meal but when I wandered into the local liquor store, I found a rather large display of microbrews right near the entrance. I thought, what the heck, let's knock a few off my goal of sampling 50 microbrews. I chose three. I probably should have taken notes while drinking these brews, but I didn't. I just gave into the experience and hoped I remembered something about them later. 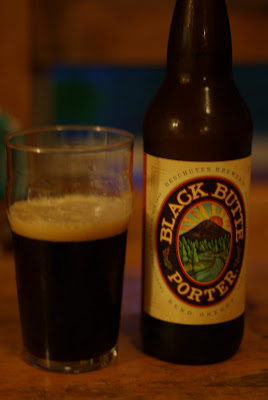 I loved this one the best. It is a Black Butte Porter brewed by Deschutes Brewery out of Bend, Oregon. I could definitely taste the chocolate finish. Drinking this porter confirmed the fact that I much prefer darker beers. They always seem smooth to me and totally drinkable. You'd know what I mean by "drinkable" if you've ever had a bitter brew that you couldn't finish. The website mentions something about drinking this while eating a hot-baked pretzel and I just about groaned with the thought. I can't wait to have this one again! 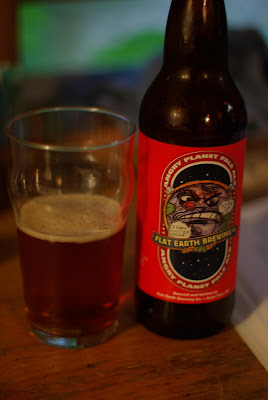 Flat Earth Brewing Co. is local, right out of St. Paul, the sister city on the other side of the Mississippi. Yeah! A local microbrew. I had the Angry Planet Pale Ale. Yes, I'll choose wine because it has an attractive label, so why not beer? This label was hilarious! It features a very cranky looking Earth, fuming and muttering "Da earth ain't yer mudda!"

This beer was only slightly bitter and definitely drinkable. But, I think I'd rather try the Porter next time. This brewing company has a number of seasonal brews which I want to keep in mind as it is an opportunity to sample more local microbrews. In particular I want to try the Winter Warlock. 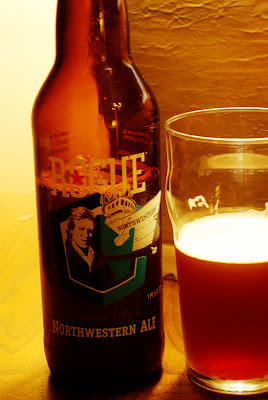 OK, so for this last one I had high hopes. I saved it for when the Big D returned back from his trip as we are both big fans of the Deadliest Catch. Captain Phil Harris died the morning that our Baby was born and it was very strange to return from the hospital and get this news. Like, hey we were only gone a couple of days, did the world have to change so much?

This microbrew from Oregon's Rogue Ales is in honor of a different captain from that crab-fishing reality television show. It is Captain Sig's Northwestern Ale. And, I'd have to say it is about bitter as that fisherman. I couldn't drink it. That's why I mentioned drinkability with the other brews because when I got to this one, I just couldn't do it. I really like the idea of this beer and the fact that a portion of the proceeds support the Fisherman's Fund. I love the label. I just didn't like the beer.

Oh well. I can't pick all winners and the point of this was to try something new, something I ordinarily might not try. If not for this being on my Lotus List, I would have walked right by that enormous display at the liquor store with all these bottles who's labels were gorgeous to look at. I also had a really lively, friendly conversation with one of the staff at the liquor store who got a kick out of my goal of sampling 50 microbrews.

These beers kept me company after the Baby Lotus Bud fell asleep each evening. Thank goodness she sleep 12-13 hours a night now, but it sure feel lonely without the Big D around.