A Day at the Pumpkin Patch

When I was first married, I wanted to do all those "American" things that I didn't get to do growing up in my immigrant Gujarati family. You know, things like getting a fresh Xmas tree, eating eggs and bacon for breakfast, ordering pizza on a Friday night, and picking a pumpkin at a pumpkin patch. I realize now that I was starting traditions that I wanted to share with my baby. As a family, we live a life the blends together Gujarati and Minnesotan culture.

The Big D and I went to Tom's Pumpkin Patch sometime over ten years ago. We pass by every year on our way to our Airstream Retreat, but have never returned until this year. It was thrilling then, for me, to walk amongst the weeds and pick the perfect pumpkin. It was a totally different experience with the Baby Lotus Bud and just like many other things, going to the pumpkin patch was so much more fun with her!

I have a number of Halloween costumes for Lotus Bud. I picked up a couple of them at a thrift store, then received from my mother two other, new costumes. I despaired for a few minutes over the fact that Halloween is only celebrated on the one day. Then, I realized I could use these costumes for photo shoots and get some wear out of them.

So, we dressed Lotus Bud in a pumpkin outfit and took her to the pumpkin patch.

The Big D took this awesome picture of me and Lotus Bud. Can you see her amongst the pumpkins? The Big D has a new phone with a great camera on it, but it galls me that he can take such good pictures, in some cases, better than mine because I'm limited to my 50mm prime lens. I am seeking a walk-around lens. Any suggestions?

From here on out, there is a series of images of my pumpkin within the pumpkin patch. Warning: serious cuteness ahead! 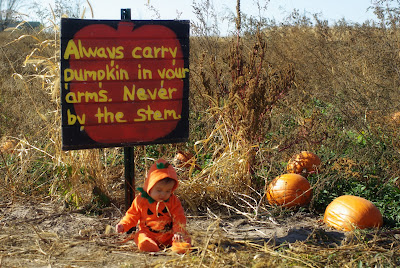 Good advise, no? Always carry pumpkin in your arms.

When did people start calling babies pumpkins? Right from the beginning, she was our Pumpkin Pie, but that's because that's my favorite kind of pie and she's so yummy. 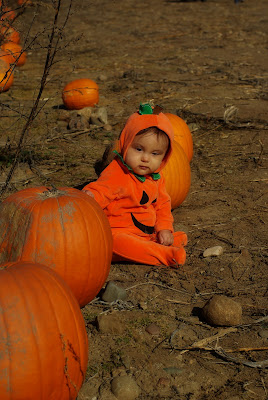 And, then she became out Shnugglebunkins. 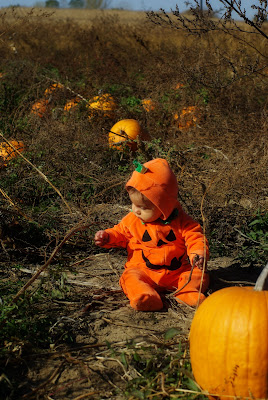 And, now she's a Shunkins. 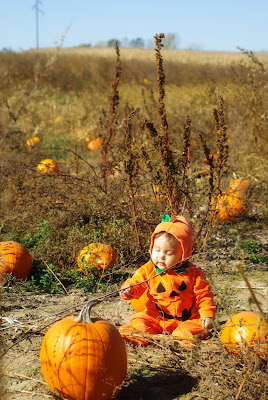 Our pumpkin within a field of pumpkins. There are over 15 acres of pumpkin fields at this location and two corn mazes. I can't wait until she's old enough to run around in the corn maze. 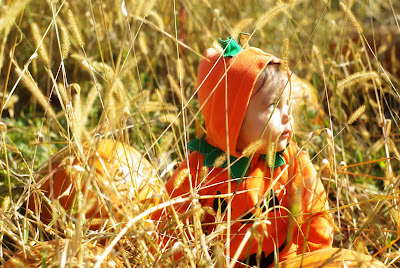 There were so many great places to put down Lotus Bud. And, how perfect is it that she just started sitting up on her own?! 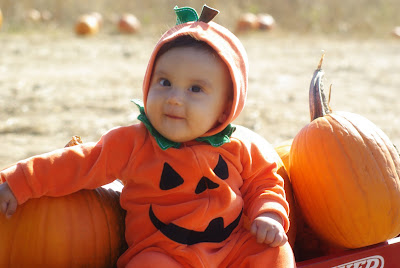 While I was shooting away, the Big D selected the family pumpkins. So many good ones to choose from. At some point, you've just got to pick one and stick with that choice, or else, you'll walk away with a dozen pumpkins. Good thing they place wagons all along the patch! We picked five, three for the humans that occupy our home and two for the cats. It seemed a logical choice to me.

$3.99 per pumpkin. The larger, gigantic, back-breaking to lift pumpkins were $5 and $10. Heck of a deal! The joy of walking the fields and picking your own pumpkin - free and priceless!

This pumpkin, however, was not for sale. We had the privilege of calling her our own. 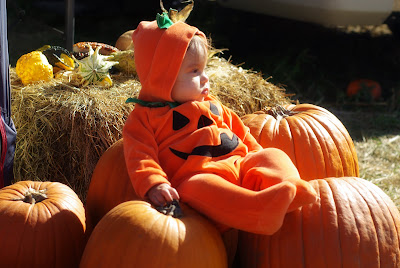 We got to talk with one of the farmers and I probably should have taken a picture, but I didn't. Instead she took a shot of us as a family. She stated several times that the mama is never in the pictures, so she wanted to be sure to get one of me. How sweet! 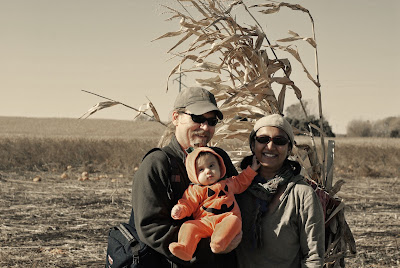 We brought all our pumpkins home and had a good time sitting under the tall elm tree in the backyard. 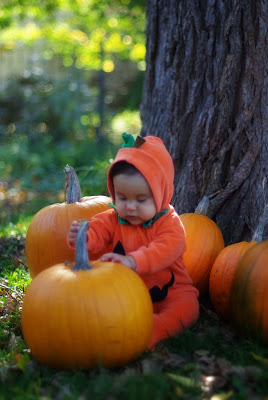 I am always impressed with my little Lotus Bud when we take her on an outdoor outing. She's an outdoors girl! She fits into our lives perfectly.

It was another wonderful day in this glorious Autumn season!