So, we made our way across the river to the other Twin City. All the way to St. Paul where the streets are organized with no rhyme or reason. Maybe I shouldn't use the word "organize" when referring to St. Paul's streets. And, this is in no way meant to criticize the capital city, but rather to point out it's quirky-ness. I've heard it said that there may have been alcohol involved when the city streets were laid out.

If anything, this should show how little I travel to St. Paul. So, in a way, it's more a reflection on my lack of knowledge.

St. Paul is prettier than Minneapolis. I just don't go there often, even though it really takes me only 10 minutes to get there.

Baby Lotus Bud and I head out to this event, an event that I had looked forward to for a long month and a half. A concert! A concert with performers from the St. Paul Chamber Orchestra. A first for me and I'm assuming, also a first for the Lotus Bud (who knows what she did in her precious lifetime). That means we experienced our first classical music performance together.

The event was organized by MomCulture and it was the first time we attended one of their events. I wish they did these things more often. 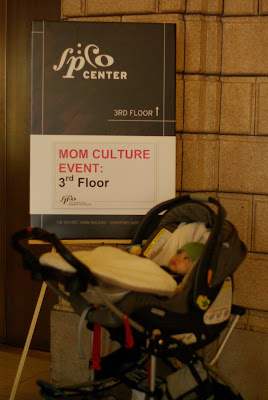 I wanted to get there early to partake in the refreshments. When I got there, I realized how far I'd come...Did I seriously think the refreshments included wine and cheese? At 10:30 in the morning? Oh yes. Instead there was bottled water and cheez-its. No kidding.

And, lots and lots of babies, toddlers, other young people and their mamas, papas, grandparents and a few caregivers.

The musicians were set up on stage that was placed diagonally in the corner with chairs set up along each wall, next the larger windows. Like a V, perhaps? I don't know exactly how to describe it, but I can say that it was wonderful.

Better yet, the musicians invited us to sit on the floor right in front of the stage. Heck yes! Front row, baby! The musicians waving and smiling at my little bundle of cuteness. It was awesome! 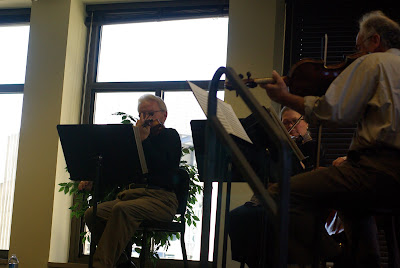 There was a little girl, 8 or 9 years old, in the front row of seats who played air-violin throughout the entire 45 minute concert. Child prodigy, no doubt!

One of the pieces that they performed was written by Amadeus Mozart. When he was 10 years old. It blew my mind.

I have to admit I had a few tears in my eyes at the beginning of the performance. The music was so lovely, the setting was perfect, my baby was totally rocking out!

She was enthralled by the two violins, the viola and the cello. 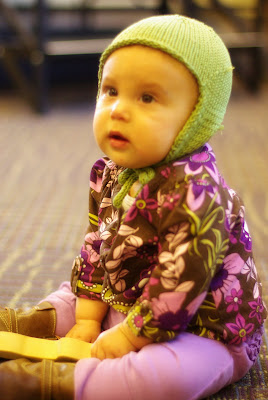 We swayed to the sounds of Vivaldi and Mozart and Bach.

It was a lovely morning! The music was transformative and ethereal. I forgot for a few moments that I was a Mama. I felt like I was hanging out with my best friend.
Labels: The Twin Cities