Iron Craft: A State of Mind

This week's Iron Craft challenge was to do a project that represents my hometown.

Completing this challenge was a very dramatic event for me. I knew right away what I wanted to do. Every since I attended Art-A-Whirl (the NE Minneapolis springtime art crawl reported to be the largest open-air art show in the country) I have wanted to do this project. Last May I saw a number of onesies for sale that had the state of Minnesota on them. I had to have one but the $24 pricetag prevented me from buying one. The Big D was certain I could make one of my own but I really had no idea how to do this. 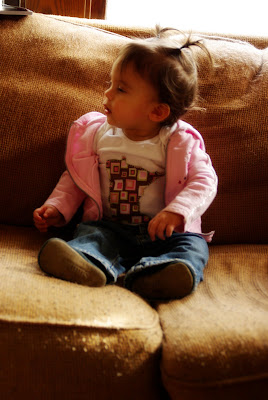 The Iron Craft challenge got me going. Printing out a map of Minnesota was fairly easy and I printed it on card stock so the project started out great! 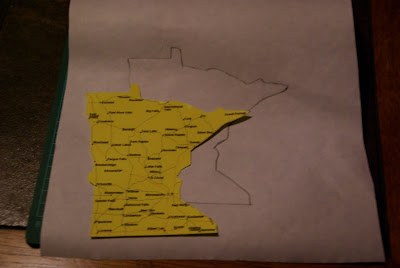 My major problem was that I've never done applique before. But I jumped right in and grabbed some cloth from the fabric store. My first stumble happened when I came home with my chosen fabric (a cute little piece with baby wildlife on it - foxes, bears, owls, skunks, etc) but I quickly realized that my little applique design could not get them all on one piece. So I packed up the Baby Lotus Bud again and headed back to the store.

Ealier that day I had searched the Internet for different applique techniques and had decided not to do the technique with the fusible webbing because I had none. My next misstep was trying to make this another freezer paper project. I haven't sewed much in my life, and the cutting and folding and sewing of the applique piece just about did me in.

I was frantic, pissed off, and ready to pull my hair out!! I had remembered to take pictures along the way so when I tried and tried again, I felt totally defeated.

By now it was late Thursday night and I could see a whole weekend being ruined by my applique defeat and the subsequent foul mood.

Then I remembered I had some stitch witchery.

Granted it was thin strips of the fusible webbing, but I made it work! 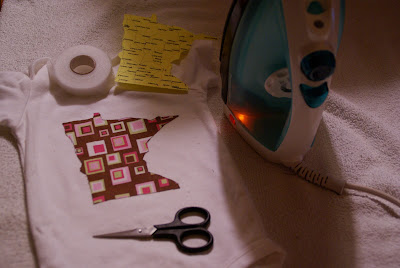 Now, can I remind you again that I haven't done much sewing? I decided on a blanket stitch which people on the Internet described as a "folksy" finish to applique. I wasn't sure if "folksy" was what I was going for but I really had no other options. I found the right color thread from my cross-stitching stash and gave it a try. Finding my old embroidery hoop helped tremedously! 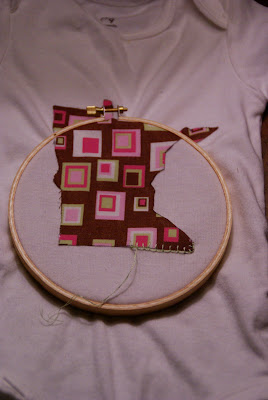 And then it was done! Whew! I felt so relieved!

The next day I felt rather impressed with myself! 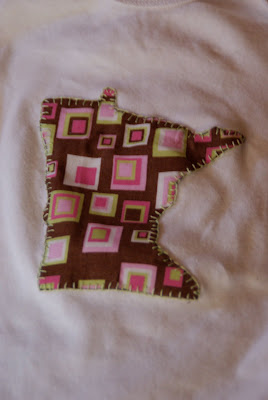 I wish I could have gotten a better photo of the Baby Lotus Bud but she's a wiley little thing now and hard to catch sitting still. 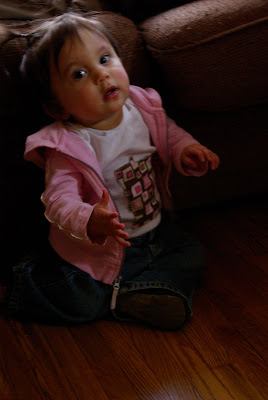 We went out for breakfast on Saturday and we got quite a few compliments on the shirt. I smiled so dang big thinking about how I saved myself over $20!!

Now I can't get my mind off my next applique adventure!
Labels: All things Baby DIY Crafts Iron Craft minnesota