I struggled with coming up with an idea for this week's Iron Craft challenge. I pouted because not only was I not feeling particularly lucky, but I just couldn't come up with an idea.

I found on the internet a number of things that are lucky throughout the world. But I had just done a project with a dragonfly and with an elephant (the ganpati om). So I pouted some more. I even went on to the comments page of Iron Craft and pouted there.

I considered skipping this week.

Finally Friday night I decided to cross-stitch something. I had a very old set of baby patterns from literally 20 years ago. I had made some towels for a baby shower.

I suppose cross-stitching was my first serious venture into craft. No, wait, I think there was a couple of months in my teens where I did some latch-hook crazy thing. Remember latch-hooking? 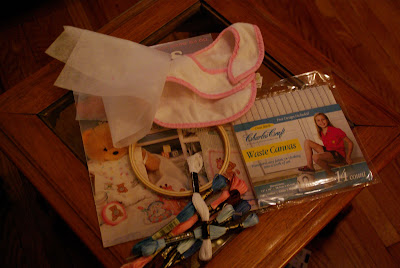 So the thing that was different in this decade of cross-stitching was that I did it on a bib rather than on a item that one can buy at the fabric store that already has the cross-stitch fabric on it. I had to buy the waste canvas and a bit of interfacing. I'd never done this before so it was a nice little challenge to myself.

Yes, that old bib is stained and dirty. That's why it's all folded up for the photo. 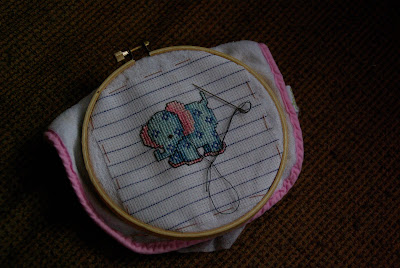 I sure wished I'd had my twenty-year old eyes. This was definitely harder in the months before my 40th birthday.

But it got done. Sort of.

I had a slight problem getting the waste canvas out. So I ended up trimming it all.

Still it got done. 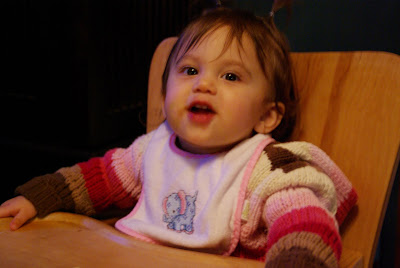 I suddenly realized that I AM lucky! I am lucky to have HER in my life!
Labels: DIY Crafts Iron Craft