This week's Iron Craft challenge was to make something involving Peeps. 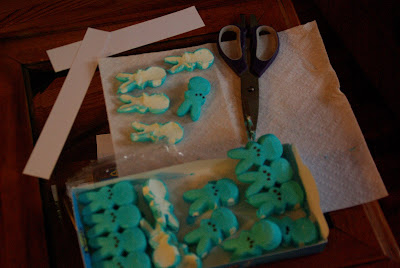 I'm shameless when it comes to searching the internet for craft ideas. Especially if the challenge is something I've never thought to craft with before, like Peeps.

I was very happy to find this project here. 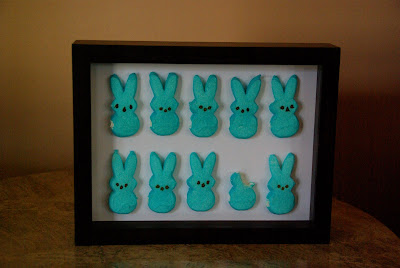 I bought the box frame at the thrift store. I paid a bit more than other stuff I buy at the thrift store. I've wanted a frame like this for years, so shelling out the $5 was no problem. When I'm through with looking at the Peeps, I can pop them right out and move on to another project with the frame.

And, in case you are wondering, I managed to eat only that bit that was bit off for the project. I promptly walked the halved Peeps and the remainders over to my neighbor's house and gave it to his son.