This week's Iron Craft challenge was to do a wedding related project. It was inspired by the royal wedding that's going to happen this weekend. Dang I remember when Diana got married. Wasn't that some thirty years ago?

The Big D and I (sort of) eloped. We didn't get very far though. We ended up at a courthouse here in Minnesota with a few witnesses. We told our families the next day. It was exciting and emotional and somewhat dramatic. It set the tone for our marriage. We've had many adventures, just the two of us.

About a month later, the Big D's sister-in-law threw a little party for us and this is the place where we got a photo. The ones from the night of our marriage ceremony did not turn out so I was really, really happy to have gotten this one photo.

We look so naive and young in the photo!

Sometimes I have regrets for not having a bigger wedding. Just being honest. I'm all into ritual and ceremony, dresses and flowers, invitations and dinner settings.

So, I decided to do an elopement announcement for us two. I used that photo I mentioned here and I'm happy that I did this. It did a lot to heal those feelings of regret. 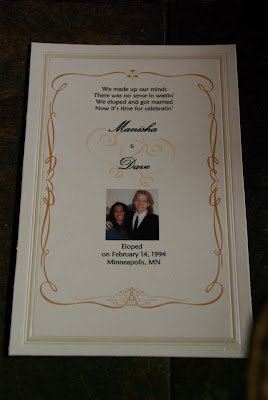 Apparently we made the right decision because we've been married now for 17 years!

We didn't have a honeymoon either. The very next day, he was back at work and I was in a composition class at the University. But, I can happily say most all our anniversaries have felt like honeymoons.