Iron Craft: Where We Come From

As I said in my last Iron Craft post, participating in this awesome group has facilitated a number of unexpected discoveries about my cultural background. I have strengthened my relationship with my mother who is sadly moving soon to Florida. I've tried some crafts and learned new techniques that were in small ways similar to Gujarati art and culture.

Gujarat is a state on the Western coast of India. The part of the family that still lives there are in a little farming town called Ghala.

I hesitated doing something that was distinctly Gujurati. To be honest, that's a little daunting. I can't catch up on thousands of years of cultural development in a one week challenge.

I did try. I photocopied an embroidery pattern and then used transfer paper to put it on a onesie. After an hour of working at it, I realized I would never get this project done. Also the fabric was slippy and not so easy to work.

I decided to switch gears.

I have this old photo of my mother and myself as a baby. It was taken 39 years ago in the little town where she lived while waiting to be reunited with my father. I love this photo. In it she has roses in her hair. She used to love roses and her family had rose bushes near their house. She told me that she would put roses in her hair as often as possible, smelling their sweet scent all day long as she attended school. Apparently my father wouldn't let her plant rose bushes when they moved to the States. I don't exactly know why. Maybe he thought they were decadent or frivolous. Still to this day she does not have roses in her garden.

See why I had to use this photo? 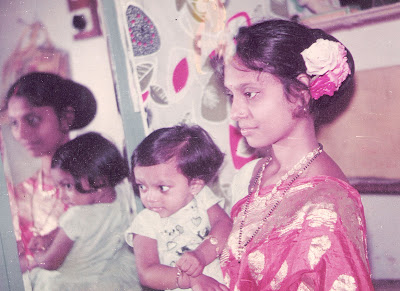 I love that there is a mirror on the left side of this photo. It shows some of curls in my hair although my hair wasn't as curly as my little Lotus Bud. Also I feel like I recognize my mother in the mirror image, more so than the young, very thin women in the forefront of the photo. See the bracelets on me, the little baby? My grandmother took some of her own gold jewlery, had it melted down, and made into bracelets for me. I have those and really must make a point of taking more pictures of Lotus Bud wearing them.

I scanned in the photo and had to do some touch-up because there was a tear in the top center. It's not perfect but it is way better than it was when I scanned it in. I printed the photo onto some photo transfer paper which was then ironed onto a dress I made for the Lotus Bud.

Before I could print, I had select some other images to print out on the 8 x 11 iron-on transfer paper. Those were $7.99 for only three sheets. Thankfully I had a 40% off coupon but still it feels ridiculously expensive. I didn't want to waste any of it even if I don't get to using those other images right away.

I wanted to do another dress because this would allow me to continue working on my sewing skills. Sewing is something I hope to do more of as the Lotus Bud gets older. I think hand-made clothes are so much better than store-bought ones. 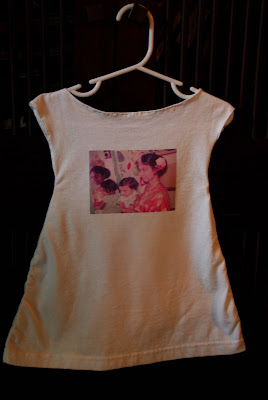 Although this isn't a Gujarati art or craft project, it definitely shows where I come from. I was born not far away from the town where this photo was taken. And I love the idea that Lotus Bud can wear us on her dress! 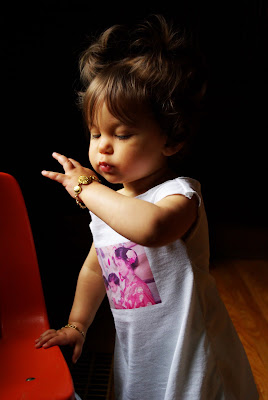