Years ago, I was into making things from twigs. Mostly all that I had made were some decorative hanging that I had hung on some of the trees at our Airstream retreat property. Like many of the craft projects I do, I developed dreams of taking it to a grander scale. I'd make twig baskets, twig furniture, maybe even an arbor. I bought supplies, I bought books.

Of course, those grand dreams never materialized. I can never stick to one sort of project. I'm always moving on to something else.

So this week's Iron Craft challenge was a good return to something I've done before. Except this time I had a glue gun to make the process go much quicker. I added some small crystals in the middle of the twig diamonds that catch the sunlight. 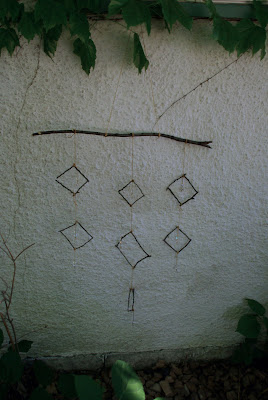 It doesn't look like much in the picture and of course, it would be much to have been had a tree to hang it on. The Big D usually climbs a ladder to hang these. It's much more exciting to see them from below.
Labels: DIY Crafts Iron Craft