So, two weeks ago I didn't get around to finishing my Iron Craft challenge. I had gathered the materials, but the time needed to put together my project just did not materialize.

This week I did two projects and maybe, it was to make up for the last challenge. Or maybe it's because I wanted to do both of them and the longer time span for this year's Iron Craft challenges allow for multiple projects.

The first I found in a round about way. I followed a link through Just Crafty Enough that led to a tutorial about recreating an Urban Outfitters wall decoration. When I saw these I knew that I had to make the flowers for Lotus Bud's room.

I bought those animal prints before Lotus Bud was born. I thought they were super cute, but now I don't know. I'm not sure I like them anymore. Adding the flowers made that wall decoration so much more personal. And the flowers brought Spring into the room.

My second craft was inspired by a t-shirt from Dharma Shop (the shirt on the right of the image below). About two seconds after finishing the iron-patch, I realized that I should have chosen a different color shirt. I had orange and green shirts available but passed them over. That was a big mistake. I like it anyway, I just think if I had chosen a different color shirt, the image would have stood out better. The shirt would have been more vibrant. 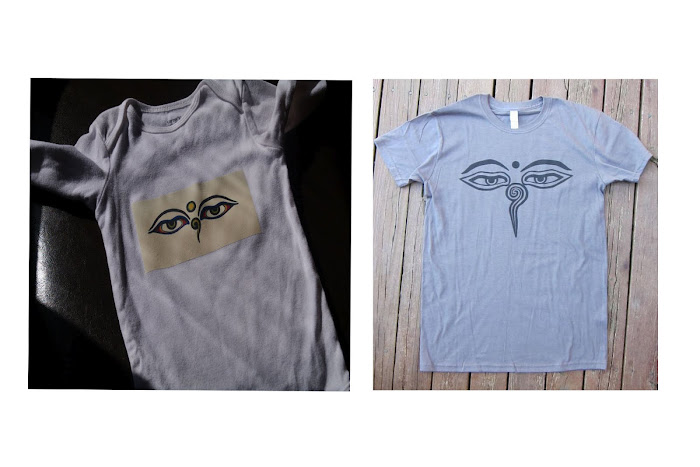 I'm so glad we had some sunshine today for the photos!
Labels: Baby Lotus Bud Iron Craft