I had a Love Affair with a Large Format Camera

I may not have a cape but my camera does. 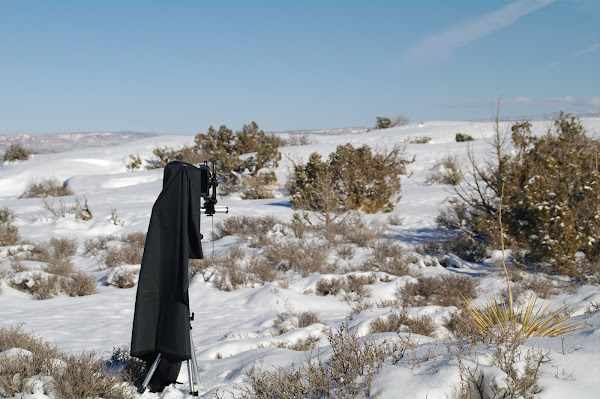 One week before our annual trip out to Moab, Utah, my neighbor offered to loan me his large format camera. I was overwhelmed by the size of it, but decided to give it a go.

We hauled it out to Utah with us and one morning I sent D and the Lotus Bud off so that I could load the film. I had one of those black loading bags, fit with sleeves and I fumbled my way to loading B&W and color film. It took me 1 1/2 hours to load 16 sheets of film. The cartridges could have been cleaner, but I figured I'd just do this thing and deal with the mess later.

It was cold the first day I pulled the camera out. I had an audience which made me nervous AND I busted the clamp that attaches the camera securely to the tripod. It was still workable but my anxiety level skyrocketed. I was so cold that I couldn't even think straight. At one point I freaked out because I could not remember how to focus. There are so many little knobs and things on this ancient beast.

The second and third attempts were much, much easier. The people watching were friendly and encouraging. In fact, one of them mentioned an awesome place to shoot. I was thrilled to have the moon snuggling against one of the giant rocks. 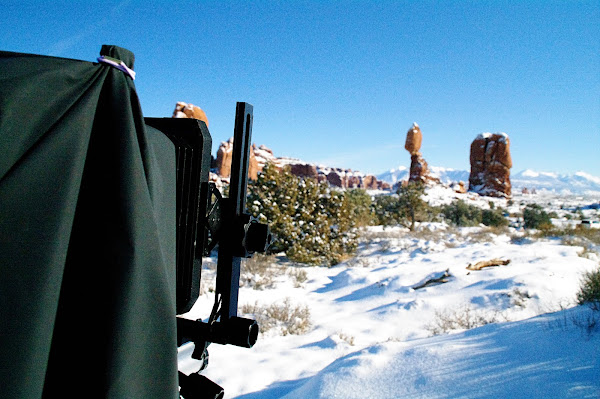 Oh, I was so happy. I was happy to be out and shooting with big film (4x5). I was happy to be trying something new. I learned a new dance that got me circling around the camera from the back to the front to cock the shutter, then around to the back again with the cable release, a pause of several seconds to let the shake subside. I came up with a little rhythm - the 4x5 shimmy.

I had dreams of a portrait series. I had visions of sharing my images at the F-stop photo group. I had hopes. I fell in love with this big, bulky hulk of a camera. We danced, we romanced. I was a superhero and it was my supercamera.

Can you see the look of lust and desire and utter satisfaction on my face? I'm so glad I had D take a few photos of me with this big hunk of a camera... 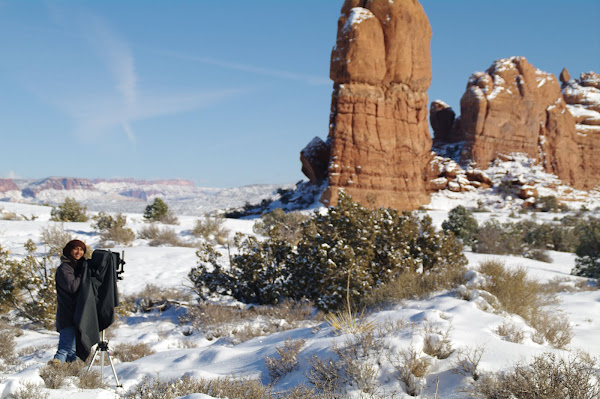 ...because that's all I got. All my negatives came out blank. It totally feels like I had this rockin, steamy affair in Moab and then the dude never bothered to call me again.

[sobs and wails, boo hoo and all that]

Regardless of the emotional let down, I don't regret the experience at all. I still have my dreams and my hopes. And I will try again. Soon.