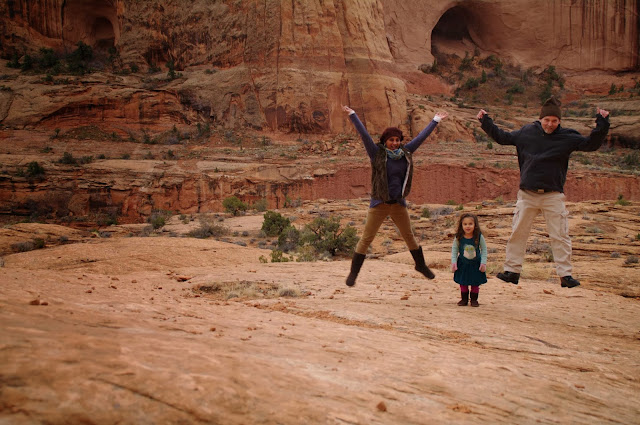 I don't know.  At first I thought maybe some of the magic and fun is no longer in these jumping shots.  But now I am glad to have this photo because we all look happy and full of energy.  I forget every year how Moab vacations can be tiring.  All the hiking, all the constant spent energy of being outside, the Jeep rides are even tiring even though we are just riding around.  We would end our adventures fairly early, say around 4 or 5 in the afternoon, this after leaving the house at about noon.

We decided to go on one more hike on this last day of ours in Moab.  It was a hard decision because all of the easy hikes are in the national park which we decided to avoid this year due to the crowds.  There is plenty to do in the area without entering either of the national parks or even the state park.  Finally we settled on Corona Arch, a three mile round trip hike.  We probably only did two miles as the last bit is treacherous with a little one but that wasn't without a spectacular view of the Corona Arch.  Have you heard of it?  The one with that can be rigged with a rope swing?

We all were fairly exhausted and snapping at each other, but also knowing that the best remedy for it is fresh air.  The grumpy adults knew it, the sullen child just got dragged along, up and away from the Colorado River and over the train tracks. 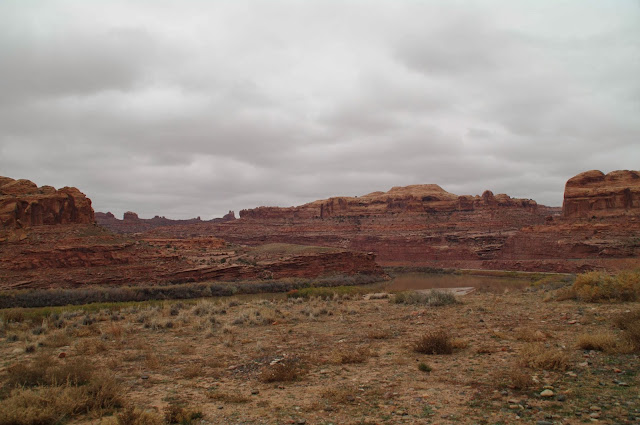 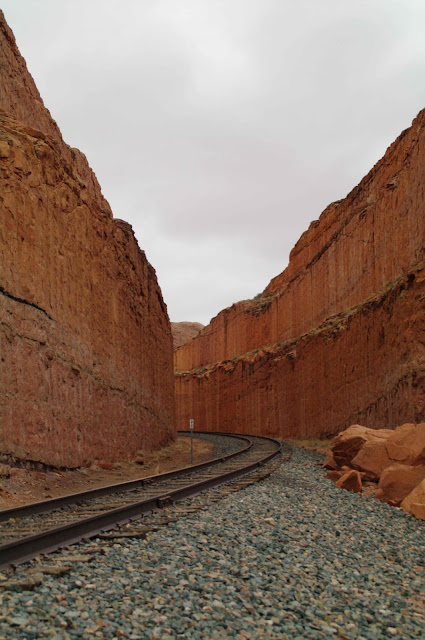 Did I say the last bit was treacherous? Well, some people, mainly the grandparents in our lives, would say the entire hike was treacherous.  It didn't seem that way to me until I stopped to think about it for awhile.  The only little kids we saw were babies on people's backs.  That should have been our first clue, but we're not good at picking up clues like that.  I got a lot of strange looks, I suppose it was because I looked like I had decided to bring my purse with me - city girl! - but really it was my camera bag and with it I was better poised to take photos than if I had it in a bag strapped to my back. 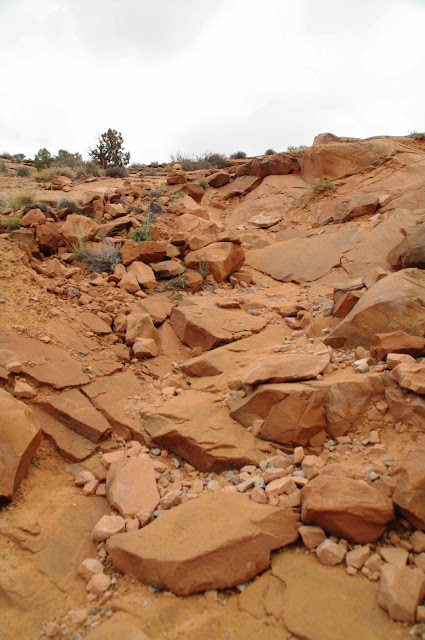 D and I took turns leading Lotus Bud over the rocks.  She was a good sport, mostly, although it did take a little while to convince her that neither one of us could carry her. 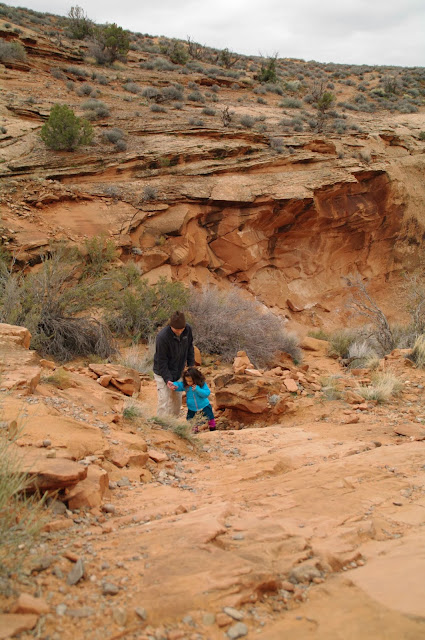 Eventually though, like nearly every square feet of Moab, we got to some incredibly beautiful spots. 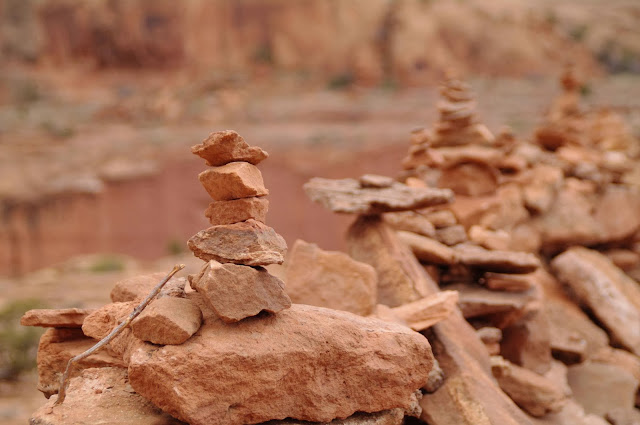 This place was full of little caves like this one, the beginnings of arches that will be arches in another thousand years of time. 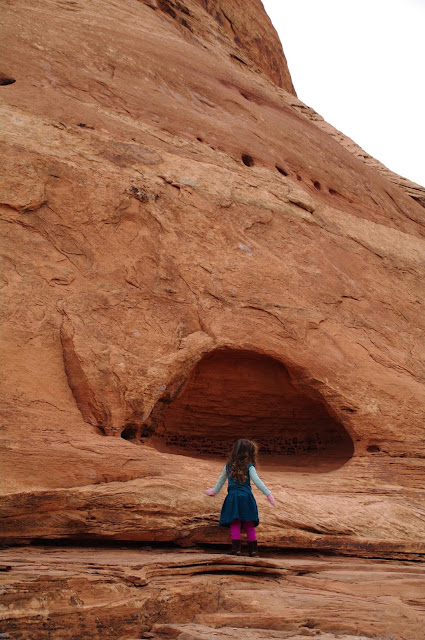 We stopped in a relatively flat spot to take some photos, not realizing that our turnaround spot was just around the bend.  I knew it when I saw the second safety cable that led straight up the rock. 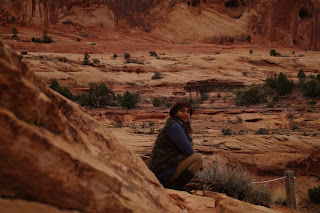 There were steps cut into the slickrock, but there was no way that Bud was going to make it up.  (I didn't think to take a picture of it, but you can see the rock in the photo above.  It's the steeply sloped rock right behind where I am crouched down, so I would turn here and climb my way up. ETA: found a photo of the safety cable)  Pity because from there on out (with the exception of a short ladder) the path is flat all the way to the base of the arch. 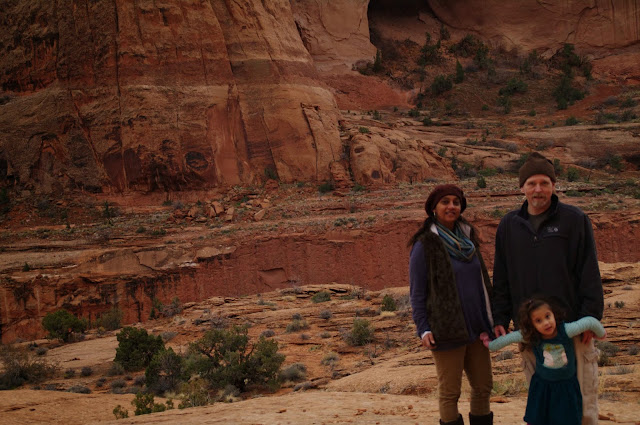 None of us were disappointed that we couldn't go any further.  The view was incredible from where we were standing.  From here we could take it all in. 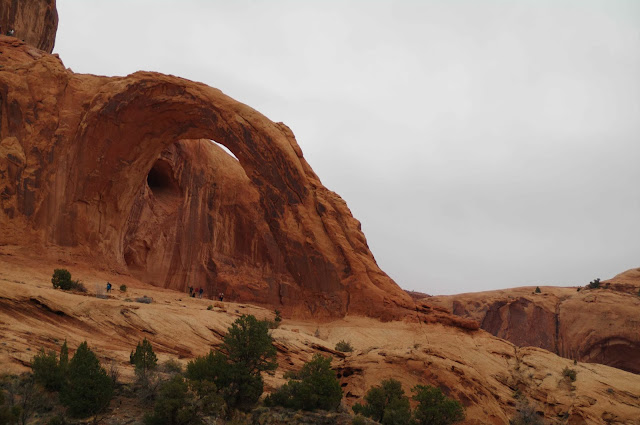 Don't know what I mean when I say "safety cable"?  Here's a photo of the first one taken while on our way out of the area.  I look forward to next year when she might be able to do more of this on her own, but I don't know if I will ever get over watching her on ledges without fear in my throat.  I told her that if she ever decides to try to rope swing off Corona Arch that she is not tell me about until after.  Her dad, though, might want to come along. 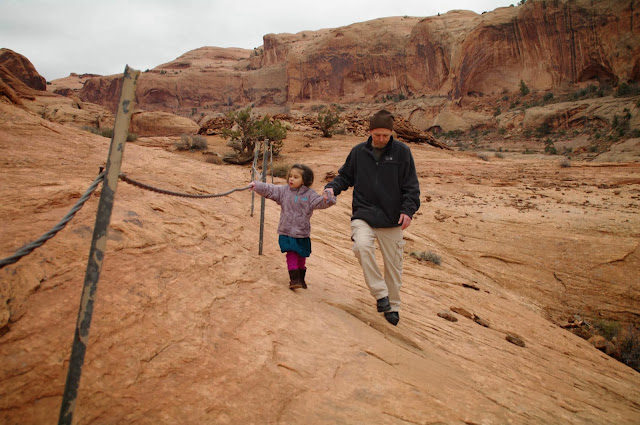 We made it safely back to the river.  Our Jeep is covered in mud.  Our clothes are packed away.