When my parents lived in Minnesota they lived near Turtle Lake which is in a northern suburb of the Twin Cities. Turtle Lake was one of the original cabin communities when the Cities weren't quite so sprawled. The area directly around the lake has that northwoods feel with handprinted signs pointing out who lives where. My parents lived in a newer community just north of the lake and since I lived one year with them in that home, I spent a bit of time on that lake with my friends. I've seen turtles. I know painted turtles which are found all across the upper midwest.

There is a nice little pond at the hospice facility where my mother is spending the last few days of her life. I take my cell phone for a walk around the little pond on a regular basis. It took me some time to notice the things moving around in the pond. I was initially afraid they were gators. Don't laugh! Every single transplant I've met down here talks about gators, especially those from Minnesota and believe me, there are quite a few from Minnesota. Beware of the inland waters, they say. Beware of the gators, they say.


I'm gazing intently at the pond trying to dry my tears when I notice a head pop up and move towards me. I'm stunned, half hoping it is a gator coming to tear up the tranquility of this place. What a story that would be!

I have no idea what kind of turtles they have in Florida. But this pond has many. And tons of them come out to look at me on the shores of their waters, they swim over and waddle out to get a better look. I stop counting somewhere at twenty.


Oh by the way? The incident with the turtles happened after I nearly tripped over this little lady rooting around near the path. I have no idea if she bites. Holy armadillo on my path, I said to the person on my cellphone. You are too cute bite me, I say to her.


While the unfamiliar adds a bit of fun, I can't help but miss the autumn colors of Minnesota. It is autumn interrupted. I've come from a land where it is cool and crisp. I am now in one that is hot and humid and one that smells a lot like India. I am suddenly surrounded by long conversations in Gujarati when I can follow along easy enough, but can only reply in English except for the occasional rudimentary words. The cool thing is that so far every time I've asked for clarification or translation, I've learned that I had it right the first time on my own. I find that pretty cool on these hot, humid days. I wish my daughter was here absorbing her fourth language, the language of her grandmothers, my mother's tongue. 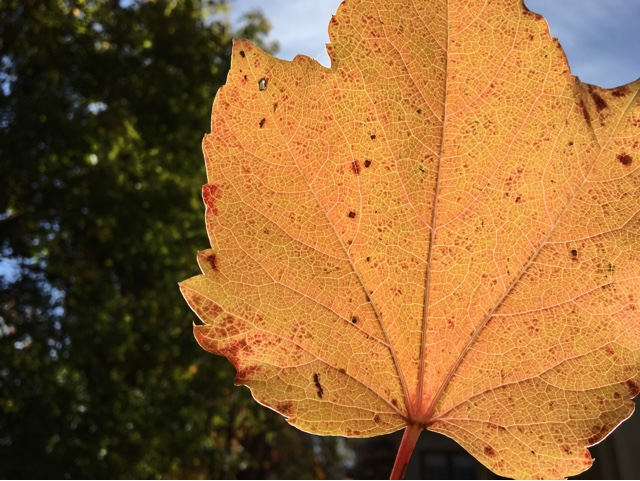 The veins of my life crisscross across continents and climates and through all sort of flora and fauna.