It is a relief to set aside the events of this week that rocked our nation. I set these events aside to return to grieving my mother and that is comforting. How bizarre. But then everything that has happened this week is nothing short of bizarre. 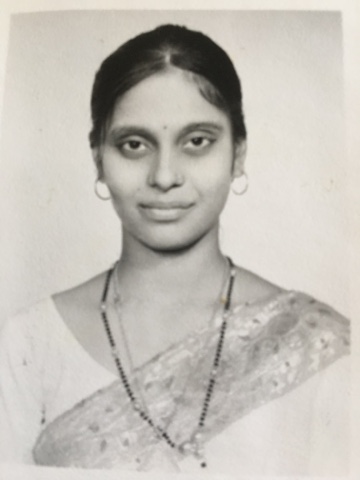 This is my mother's first passport photo. When Hema traveled to North America for the first time she brought along her 1 1/2 year old girl (me!). The plane was on its way to Toronto but was diverted to New York because of a snow storm. She did not speak English. She did not know how to set the alarm clock. She would always tell me how worried she was that she would miss her next flight to Canada. It was quite the adventure.

I was born while my father was in Canada and did not meet him until my mother made that journey to North America. My father tells me his earliest memories of me was of my little toddler self with a red ear flap hat sitting in front of the television while the Canadian winter snowed outside. I wonder what I was watching?

During the week of the funeral, many of her old friends and of course, lots of extended family flew in to Florida. And with them they brought stories of my mother, stories I'd never heard before. One of my father's old college buddies told us how she just appeared at their dorm room, sporting a skirt and blouse (she never liked wearing Indian clothes, we cremated her in her favorite dress) and as tiny as she was her presence took over like nothing these five young men had ever seen before. My mother wasn't even 5 feet tall and she weighed a bit less than 85 pounds back then. He said he never did ask her how she knew where they were. My father never asked either. It's that same spirit that kept her going through odd hours working in a Tonka factory and I'm sure the first few hours and weeks of being reunited with her husband in that cold, wintry country. There was nothing else that could have prepared her for it but her own strength.

I wish I had known my mother like they did.


I have a memory from this summer when I went to visit my dying mother. She was lucid at the time because it was only a few months after the surgery to remove her brain tumor. I remember this as the month before the tumors returned. She was sitting up in her bed watching television which was always tuned into some news channel and she suddenly became anxious. My father has installed another door alarm so she could alert us if she needed anything. The bell sat in the kitchen and when my mother became anxious that day, the bell started ringing and ringing like crazy. She was watching that man, the one that over half our nation's people elected.

So I'm glad she is not alive to see what happened this week. But then I can never know for sure if she would have supported him if she hadn't gotten brain cancer. My sister I believe voted for him, she had bragged to my little six-year-old daughter of her intentions. It never fails to amaze me that immigrants, specifically the ones in my family but I suspect many others too, support the Republican party. I think it is because they believe that gives them access to the American dream but they don't realize that many from that party have no intention of opening those doors of opportunity for them.

So I grieve for what I know. I grieve for what I've seen. I grieve for the fact that my daughter thought her friends and mother were going to be banned. I grieve that she came home from school on Wednesday and asked me if we get to stay living in the city that we love, another city soon to be full of cold and snow. Minneapolis, just like my mother's experience in Toronto, will form early North American experiences for my daughter. I want her to always remember the joys of snow and a warm red ear flap hat.

Somehow today found I had the strength to set all that grief for our nation aside and return to grieving my mother, a woman who I never really knew. And that is a relief. I'm sure her next journey is just as adventurous as the first trip to North America. I hope it is far more peaceful.