alone in the woods 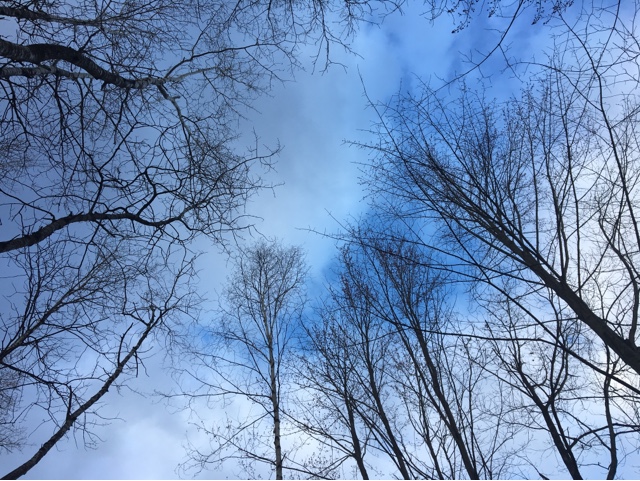 When I left the city, I felt hopeful. The sky seemed like a far-off limit. The damp definitely not a deterrent. I left behind my family and my home. I picked up hummus with a layer of olive tapenade. My family does not like olives so this seemed like a symbolic treat for me. I was going to arrive and relax, immerse myself in the woodland region. I would have the sound of birds and the peepers to myself. I could do what I wanted when I wanted and my plan was to do a whole heck of a lot in one night away in the woods. I hadn't felt this free in a very long time. 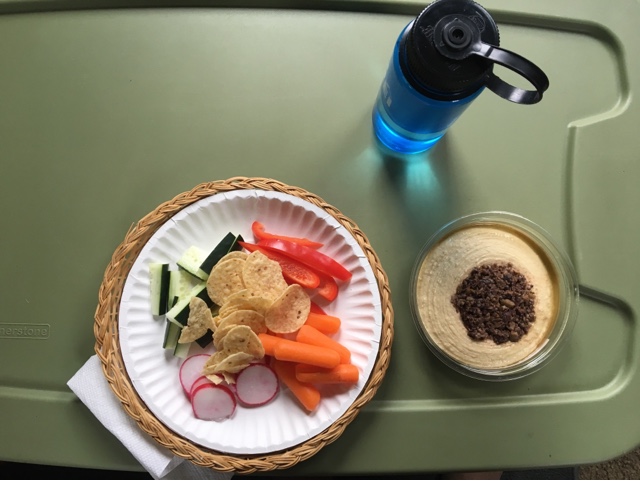 Of course I had a few mishaps. I didn't have the keys to turn on the power. After a few phone calls to the man who gave me the wrong keys and a quick trip back into to town for a bolt-cutter rental I was back on track. A friendly interaction with the township guy trimming trees off the road got me the necessary help I needed with the last 1/2 inch of the padlock, he was the only other person within miles of our airstream trailer. Arrival was delayed and lunch was delayed so I decided to sit quietly in the trailer and read a book. I felt lucky to be warm and cozy and very much alone.

The secret of change is to focus all of your energy not on fighting the old, but on building the new.
-D. Millman 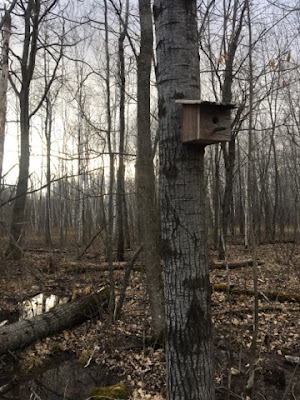 The sun peeked out in the early evening and I finally got outside. I decided to scrap all my plans for productivity and to put all my focus on immersion into the woods. I wondered if it would be possible for me to be still for a moment or two.

It was ridiculous how pleasurable it was to there by myself. The birds were back and loud with a cacophony [oh how much I like that word] of calls and trills. I stood with my journal facing one of the birdhouses hopeful that a mama bird would choose this one. I wished I had a stool. But I was there and it felt good.

So good that I was thinking about what it would be like to live here. Maybe just one week each month? Just to get away and find some balance. So much privilege in this act, I know, and I should use it to my benefit. 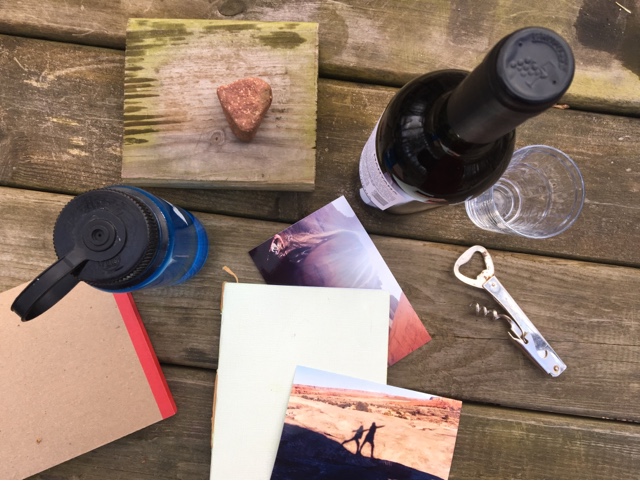 Thinking about the privilege of it all let the thoughts come crashing in. I wondered where it all had gone wrong for me. My life was supposed to be different. In the ten years since receiving my PhD* I should have been writing or teaching or researching or something. Instead I couldn't get a job, I fell into depression, and gained dependency on my husband. But also I had a child and here I am sitting in the woods all by myself. I gave up arguing with my father long ago about who I was but since my mother's death, I tried to build a relationship with him. 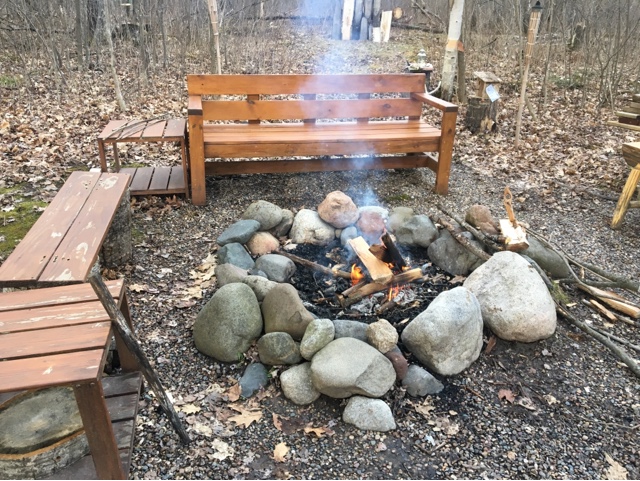 I stood and stared at the land behind the fire, I admired the long length of the tree trunks, the bones of each tree. I was watching a tall skinny poplar just beyond the edge of our property to the north. While I was watching it shook. It was shaken by something large which had moved past it, brushing a shoulder or a back foot or a hip. It was a tap that sent a violent shiver of movement up the tree. I could tell it was a large animal but I couldn't see it. I silently prayed that the wind would pick up again and prove me wrong but that never happened.

The quiet lasted for all of thirty minutes before the texts started coming through. In the end I didn't mind them so much. It was time for me to build on the new. 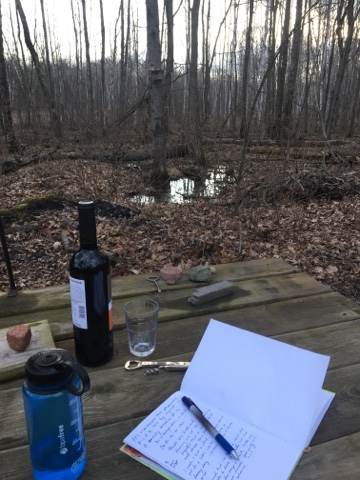 I surprised myself with how much time passed before I opened the wine. Mishap number two and lesson number one: couldn't uncork the wine, had to push the crumbly stub into the bottle. I understood now the benefits of having screw top wine. 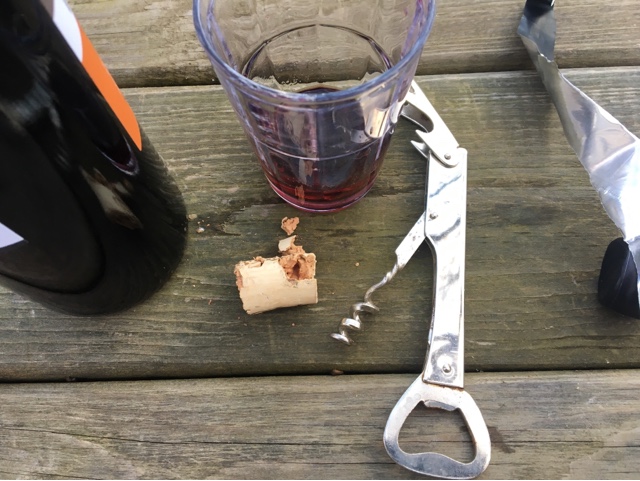 Later I chopped wood and gathered more that had fallen on the ground. I got quite the crackly fire going. Lesson number two: having wood chopping skills has paid off. 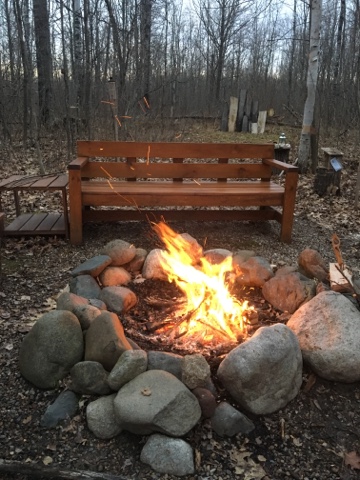 Lesson number three: in order to rid myself of the fear of large beings in the woods, I must stay out past sundown. Which is exactly what I did, listening to music, sipping corky wine. 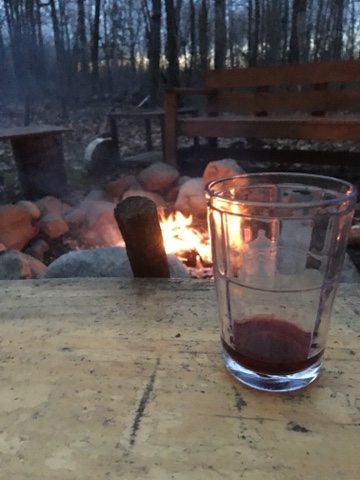 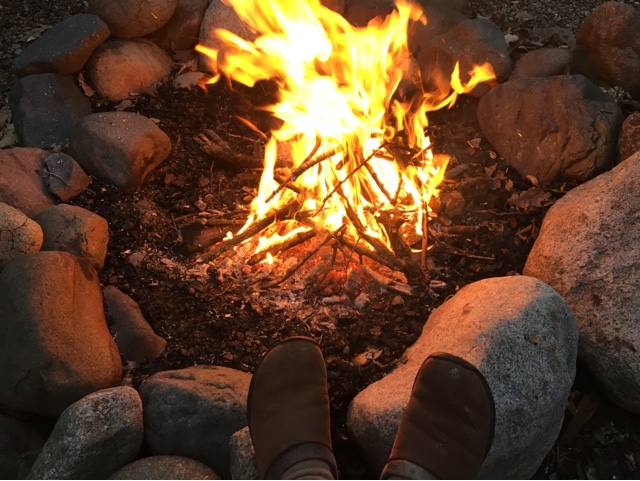 Lesson number four: I need time to myself to know myself again. So much has changed. I realized I could choose the good in me and build upon that. Truth: I am not a terrible person, something my parents drilled into me again and again. My stagnancy in the last ten years proved the same to my feeble mind. Truth: I wasn't stagnant in the last ten years. It's just that I didn't do the things I thought I was going to do.

Lesson number five: I can love myself and believe that the things I do matter to me. Because this me is the only one I have to answer. The woman who gave birth to me has passed and now it is time for me to take up that task. 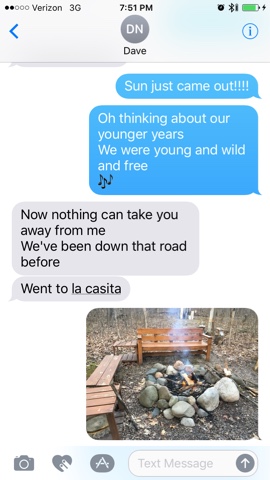 Lesson number six: But it's not just myself in this world. I have my daughter and my man who remembers those days when we were young and wild and free. And right now that seems more than enough to build a new me.

P.S. It's true that once in your life you find someone who will turn your world around and bring you up when you're feeling down. It just occurred to me that that person could be me.

*Just recently I've encountered a white woman insisting that I must listen to her about the proper way to go about dialouge and inclusivity. A woman who is a professor and a PhD, I know because she's told me three times already. This all makes me think about who has access to the power derived from such degrees and who doesn't. You see it is not that I am a terrible person, I'm just someone with such a small of power that nearly everything that I say or do will be of my own values and sometimes that will seem contrary.