When we travel we buy a puzzle and a deck of cards that have images of where we made memories.

Let me backtrack for a minute. For over a decade we have been making the trek from Minneapolis to Moab, Utah for the Thanksgiving break. We started the girl early on so as a family, we are good with long two or three days on the road. Because of the pandemic we had to cancel our trip which left us all feeling lost. So as a remedy I pulled out a puzzle that we had bought years ago. 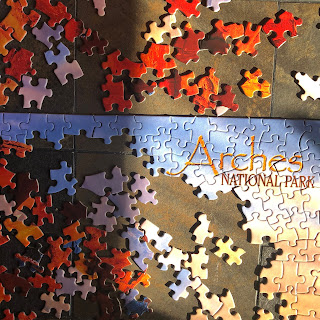 We decided to do this puzzle over the Thanksgiving weekend. The image is of the Delicate Arch in Arches National Park. We did this hike in 2018 only because the local yarn shop owner suggested it. We had avoided it all these years because of the crowds that are drawn to this icon. She said it was worth the 6 mile hike because the arch is such a unique landmark. She was right, of course. There were crowds and there was a whole crowd of paparazzi set up for sunset and starlight photos. What I most remember was the full moon that came out on our hike down. 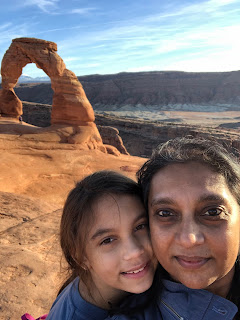 It took us seven hours to complete the puzzle (about twice the amount of time it took to hike) and we went through a range of family dynamics. The emotions flitted between wild, frustrating, annoying, and (for one girl in particular) boredom. It was at times exuberant especially at that moment of placing a long sought after piece. At other times, biting and leaving us questioning our sanity. 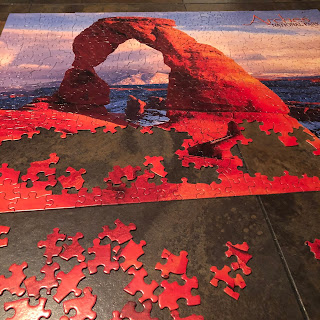 Surely someone had come and removed pieces and replaced them with ones that don't fit this puzzle!

I know we had completed this puzzle back in 2014 because I marked it on the inside cover. It shouldn't be so hard. There was a piece missing as we neared the end. It's like the hole in our hearts that can only be filled with Moab. 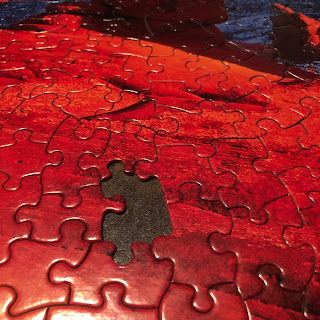 Eventually we found the missing piece which was knocked around the floor by one of the kitties. Dinner was delayed while wine was opened as we completed the puzzle. I hadn't meant for us to spend the entire day on the puzzle but that's what we ended up doing.

I'm already plotting out which puzzle we will do next!