The Hennepin County Museum Adventure Pass Program is offered through the local library system and provides two free admission passes for several museums and other organizations, including the two zoos, here in the Twin Cities area. Since hearing about this Program and compiling the Lotus List, I have set the goal to visit all these locations. I thought this would be a great way for me and Baby Lotus Bud to get out of the house and take advantage of the great opportunities in the area. Little did I know that this is starting a good pattern for us. I look forward to these outings and I think the Baby Lotus Bud enjoys it as well. 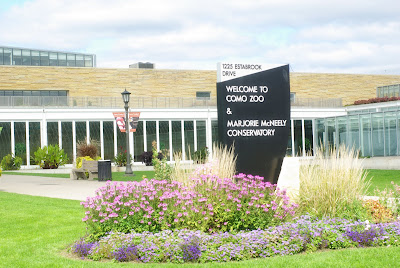 Last week, Lotus Bud and I headed out to the Como Park Zoo and Conservatory with an old high school friend of mine and his two-and-half old daughter. It's fun hanging out with the two of them, catching up with my old friend, and seeing his daughter wander around and discover things with toddler fascination.

I always have mixed feelings about visiting zoos. Animals caged up, animals living in unusual environments dissimilar from their natural habitats, and animals subject to the constant barrage of noise from children and other visitors makes for a highly controversial destination. I felt sad, but I was also filled with a little bit of childlike excitement when we went to the zoo. I started thinking about the extinction of so many species throughout the world and felt a bit relieved that there are efforts, granted small and limited efforts to preserve some wildlife. 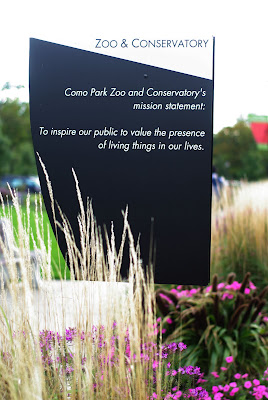 The entrance to the Como Park Zoo is beautifully dominated by the Conservatory. I know a couple who got married at this place. 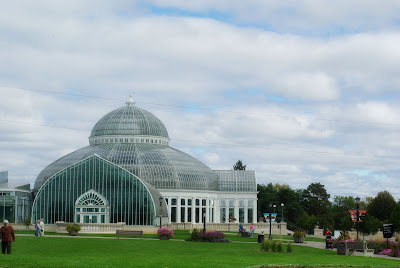 There are several Gardens at Como Park and I think this will be a great place to explore once the snow hits the region.

On the day of our visit, the skies were partly cloudy, the sun peeked out and when it did, it felt warm and inviting. Perfect weather for visiting the zoo. 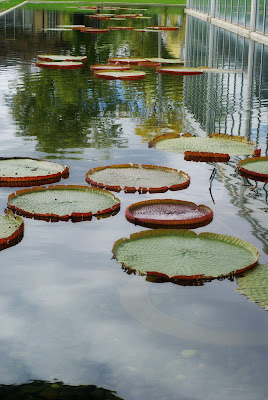 Immediately after we entered the zoo, we were hit by the cacophony of sounds from the duck pond. Hundreds, perhaps a thousand ducks gathered and mingled with dozens of flamingos. 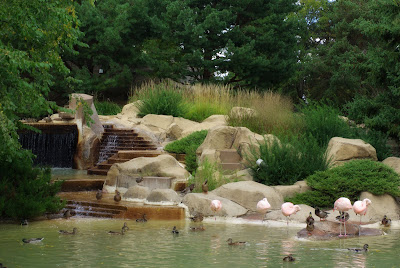 It was very, very odd to see flamingos in Minnesota. They weren't the bright pink of Florida flamingos and it definitely seemed too chilly for them. But, there they were in their long-legged majesty. 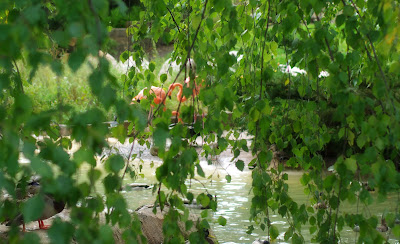 Warning: from here on out, the animals get bigger and sadder, so stop reading right now if you get outraged by such things. 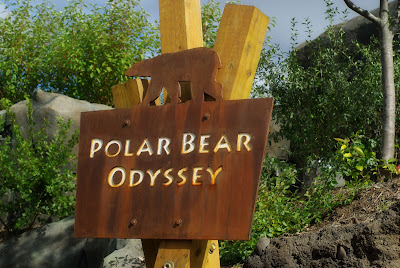 This sleepy bear was perched right next to a viewing window. You could get a look at it's fur up close and personal-like. The areas are set up so that they can be seen from the inside of an exhibit room and also from the outside. I took Lotus Bud inside so that she could feel a patch of fur. It was bristly and not soft at all. 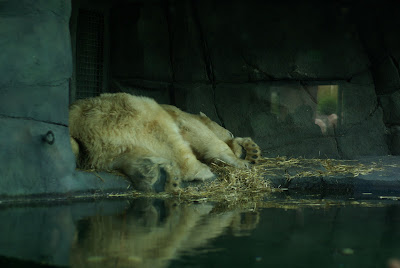 Years ago, when I first visited this zoo, I was immensely saddened by the pacing of the polar bears. They would walk through water so their wet footsteps made it apparent that they took the exact same step as they walked to and fro. I've since come to learn that they are creatures of habit, so this behaviour is apparently "normal" despite the closed, cramped quarters. I was glad to see that the Park had greatly expanded the area since my last visit, yet it is nonetheless a tiny area in relation to the vastness of the Arctic. 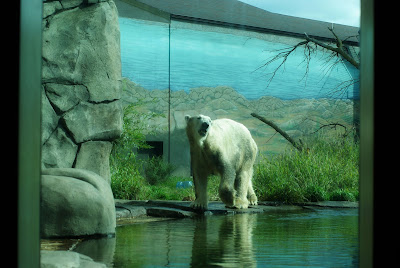 Next up: giraffes. And, a baby one, too. Again, this is a very odd thing to see considering the Minnesota climate. I was told by another Mama to avoid the zoo in the winter time because there is no other option than to enclose the giraffes in a small indoor cage. 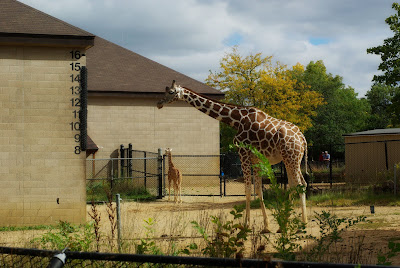 Seriously, though, despite all my griping here about the sadness of zoos, we did have a good time. It was funny to think back on the fact that we spent an hour and half right next to the duck pond because we decided to have lunch right away. The toddler needed to eat, then I went and got a veggie burger, and then, Lotus Bud needed to be fed. The Como Park Zoo is quite small, so spending so much time just talking and eating was a great way to fill the hours of a beautiful Autumn afternoon.

The monkeys were the awesome! Too bad we didn't see the gorillas outside throwing stuff around! 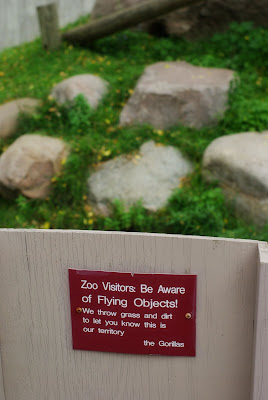 When we entered the monkey building, I took Lotus Bud out of her stroller and found a spot on the floor so that we could sit and watch the monkeys. She was so excited, screaming a bit and kicking her legs. The monkeys came right up to us and gave us a swinging show. 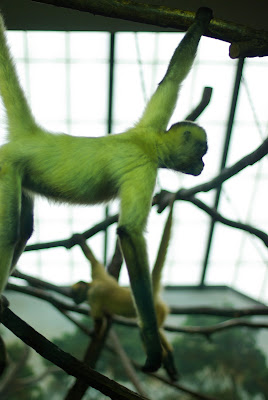 We walked out of the building and found the orangutans hanging. Watching the Mama with her little orangutan baby was hilarious. She looked tired and I so understood that feeling! 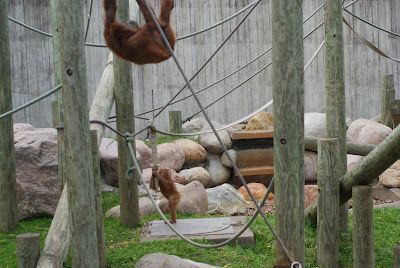 After the monkeys, we decided to leave. I had to take my own little cheeky monkey home. 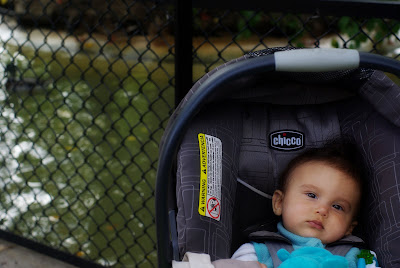 There are couple more outdoor destinations on the Museum Adventure Pass Program. I would really like to visit them this Fall. Here in Minnesota we've had a decade of warm Autumn and Winter seasons, but that seems to be passing as this season is already very chilly. I can almost smell the snow in the air. It won't be long before the snow flies. Perhaps we will get in one more outdoor destination, if not, there's always next Spring!