This Rogue bottle of beer is a big ass bottle and it has been sitting in my fridge since last Fall. I have a small fridge. The big bottle took up a lot of space for far too long.

Why haven't I sampled it yet?

I stopped drinking beer last Fall in an effort to lose some weight - too many carbs. I still really enjoy beer and when we visit a place that brews beer I have to buy some. I've got quite a few varieties from our trip to the Keweenaw Pennisula.

Also, I admit I got a little scared. I picked a few microbrews from my local liquor store and I hit just one too many that were not to my taste.

And so the Shakespeare Oatmeal Stout sat in the corner of my fridge for months and months. Yet every time I opened the fridge there was Shakespeare tipping his hat to me as if to entice and seduce. 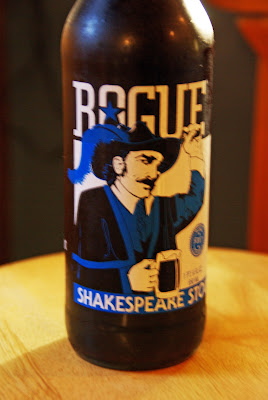 I resisted. Until tonight.

But I should say I only opened it because we have to simmer some uncooked brats in beer before they go on the grill for tonight's dinner. I forgot to pick up some cheap beer for this purpose. It being Sunday and all and since I live in Minnesota, there is no beer to be had on this sunny, warm June day.

Did I mention it's a big ass bottle? I don't need all that beer for the brats so I poured myself a glass, remembered I had this Lotus List, and decided to live a little.

The Shakespeare Oatmeal Stout is made by Rogue and they use no chemical, additives or preservatives. Yikes! I guess I got lucky that the beer is still fresh.

It was a beautiful, creamy pour with a tan, foamy head. We're off to a good start!

The beer is very dark, Rogue calls it "ebony."

I stuck my nose down into the glass but was not able to distinguish a particular aroma. The Big D claims he smelled something chocolaty, something nutty. I need to fine tune my senses here, for sure.

I had a smooth sip that coated my tongue. It left a slightly bitter, slightly nutty aftertaste, but then mellowed out meaning the bitterness was gone after a few minutes. That I like.

After about 5-6 tastes I caught hold of something very, slightly fruity on my tongue - ahh, me thinks that tis the character that names the beer well.

I found myself watching the bubbles gently on the surface. The remaining bubbles seemed to collect in the glass which at first seemed to me like a galaxy of stars. But after they settled, I looked down into the glass and saw islands. Seriously, no. I'm not drunk. Yet.

There it is - Friends, Bloggers, Beer-drinkers. The Rogue Oatmeal Stout was slightly bitter, slightly fruity, all good - exactly like Shakespeare to me! It was well named indeed.
Labels: The Lotus List of 108 Things